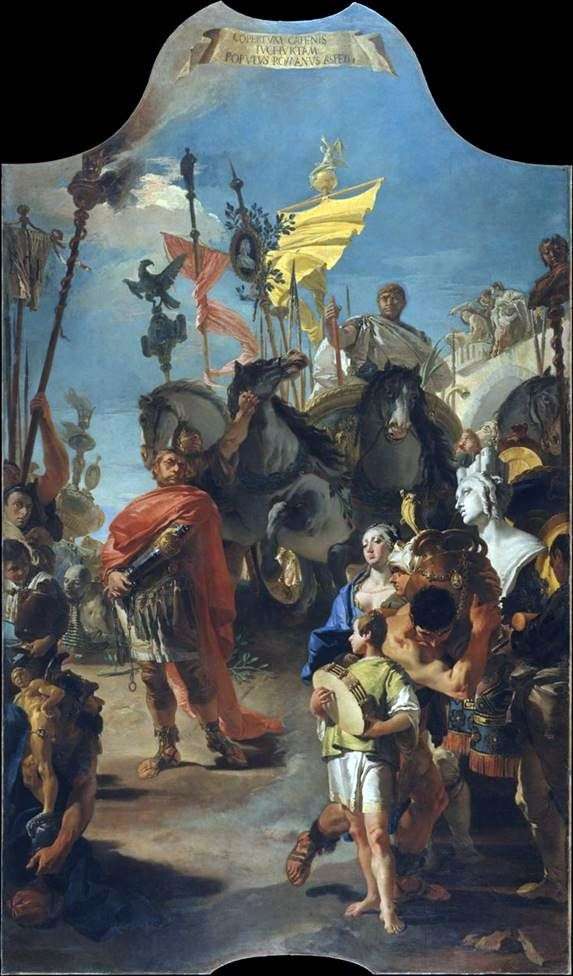 A large canvas refers to a series of ten paintings devoted to famous episodes of the history of ancient Rome and intended for a luxurious hall in Ka’Dolfin, the Venetian residence of Patriarch Aquileia Dionisio Dolphin. Pictures, enclosed in frames, made in the technique of Trompe-l’oeil, later in 1870, left the palace walls.

In the Metropolitan Museum there are two more works of this series – “The Taking of Carthage” and “The Battle of Vercelli.” The other seven divided between St. Petersburg and Vienna. The canvas depicts the captive in chains in Rome of the Numidian king Yugurth, finally defeated in 107 BC. e. Gaius Marius after a brutal war lasting six years.

The scene is represented in accordance with the rules of the ancient Roman ceremonial: the triumph was one of the highest honors given by the Senate to the victorious commander, who, accompanied by military distinctions and military trophies, passed through the streets of Rome in a lush chariot drawn by white horses.

This work is transitional in the artist’s work, reflecting both the youth period and the style of the mature master: the spirit of bombast and high-spirited scenes is enriched by a light decision harmoniously uniting figures and surroundings and a magnificent sense of color drawn by the artist in the Venetian art culture of the 16th century, creativity Veronese. In the left part of the canvas, before the warrior carrying the torch, Tiepolo portrayed himself.