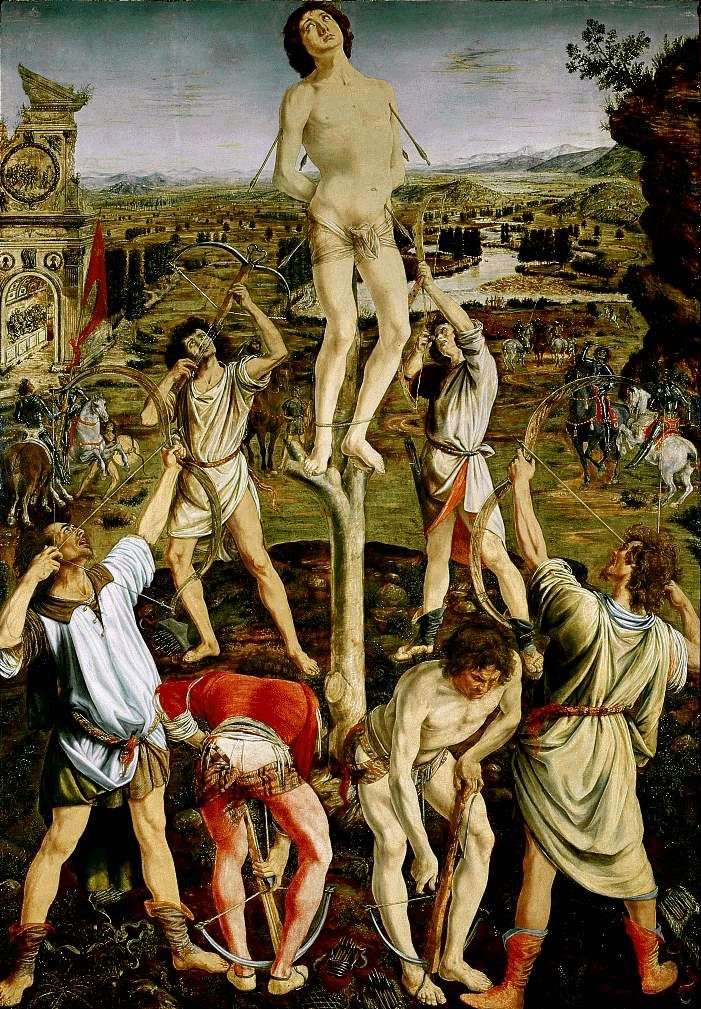 Italian painter Antonio del Pollaiolo brought world fame not only his paintings, but also sculptural, jewelry and engraving works. Probably, work in various fields of art that require a clear view of both space and plane explains the artist’s special interest in human anatomy, perspective and landscape.

Pollaiolo is a representative of the Florentine school, which means that he was well acquainted with the achievements of his predecessors. Chiaroscuro, spatial perspective, was mastered by him even during training. It seemed that nothing could prevent the artist from creating on the canvas an illusory reality in the traditions of the best Italian masters; however, in reality it was much more complicated.

While the artists of the rest of the world mastered the discoveries of the Florentine school, anxiety began to grow in the ranks of the Italian masters themselves. The joy of the victories they won was gone, and suddenly it became clear to the artists that art could not develop without loss. The medieval masters did not own the technique of creating volume on a plane, but this helped them to build clear compositions of their works. They could absolutely arbitrarily arrange the figures of the characters, achieving the perfect harmony of the whole. The Florentines tried to convey reality on the canvas, which means that solving compositional problems was no longer so simple. In reality, bodies do not fold themselves into a single whole, do not occupy space in such a way as to give the impression that the lines are complete.

Florentine artists adopted a great force, but its acquisition threatened them with the loss of another important achievement – the unity of form. Overcoming this contradiction was the main task of the new art of Florence.

The same task was to be solved by Pollaiolo. Unity of form was one of the most important conditions for creating altar images and frescoes in temples, where the image had to fit into the overall architectural appearance. Non-observance of this principle meant the destruction of the entire artistic ensemble. In 1475, Pollaiolo set to work on the altar image, the plot of which was based on the legend about the execution of Saint Sebastian.

The attempt of the artist to combine his own intuitive sense with more rational methods in the course of his work was not entirely successful. The picture he created can hardly be called attractive, but it shows how rationally the Florentine artists worked. The scene composition is strictly symmetrical. In its center is a pillar with a martyr attached to it. Sebastian is surrounded by six executioners, so that human bodies form the correct shape of an acute angled pyramid. For each figure on the right, there is a paired figure on the left.

The axial symmetry is observed by the painter and in the outline of the landscape. She is so strict that she is ready to go into hard schematism. The artist did not want to do this, so he begins to vary the poses of people. Thus, the two archers in the foreground are shown to them from different positions. The one on the left of the picture, turned his back to the viewer, his right “analog” facing us. The painter adheres to the same principle when depicting shooting archers. But now the executioner on the right is shown from the back, and the twin figure to his left is depicted facing the viewer.

The game in postures turns into a demonstration of compositional exercises, which also does not allow us to attribute the picture to the number of great master successes. Inspired by the experiment on the composition and giving in to a detailed description of the anatomy of the human body, the artist distracted from the central theme, which could not but affect the overall impression produced by the painting. Events and beautiful views of the Tuscan countryside are not associated with drama. They are built according to all the rules of perspective, but with the hill on which Sebastian is tortured, they are connected mechanically.

However, despite all the conventions, the picture is of great interest to the researcher. The expressiveness of the event is combined in it with an attempt to rationalize knowledge of the real world; besides, the cult of a clear, precise line, plastic form is affirmed. This picture helps to understand the tasks that artists worked on during the border period. A generation later, these problems will find their solution, and then Italian art will reach its peak in its development, but the first step on this difficult path was taken by Pollayolo.