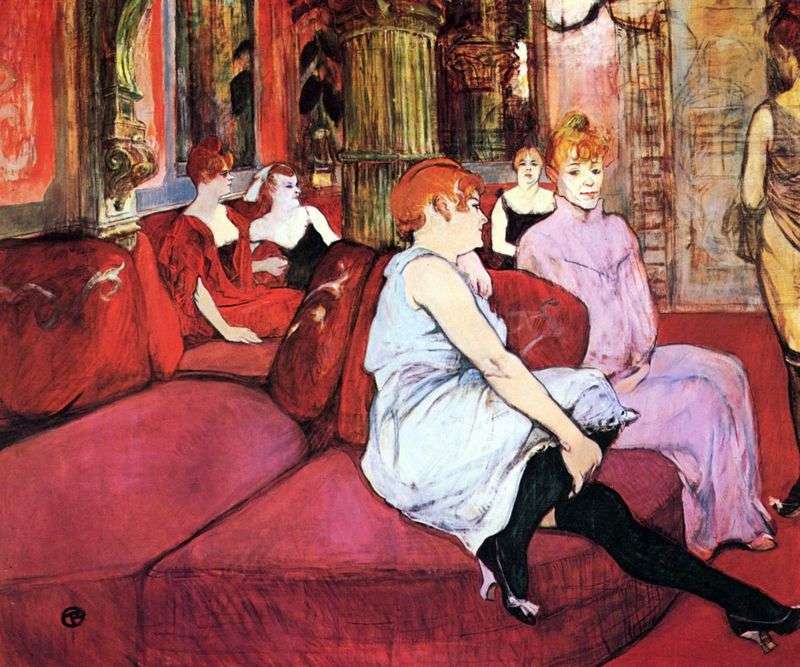 “Salon in Mulen Street” is another work that opens the door to the world of a fallen society that does not condemn its foundations, but also does not idealize the way of life of its inhabitants. Lautrec was not occupied with moral issues, and with “priestesses of love” he communicated as with ordinary girlfriends. Quite a different feeling filled the artist when he came across men who bought love from these women: in the house of tolerance these people had one face, but with the exit from the institution, their appearance radically changed, acquiring features of decency and exquisite behavior.

According to the developed style, the composition is created as an ordinary, accidentally peeped episode from the life of a brothel, where the staff sits in anticipation of the client, and the scene differs in the usual routine. Spiritual life in the eyes of some women has already faded away, but those who have suffered for this and suffer daily pain are also preserved. Madame, clasped under her leg – a prostitute Mireille, most of all experiencing sympathy for Lautrec.

The work is considered the most thoughtful of a series of paintings on the life of institutions of this kind. The canvas features a rich color palette, and when it was created, he performed many preliminary sketches.