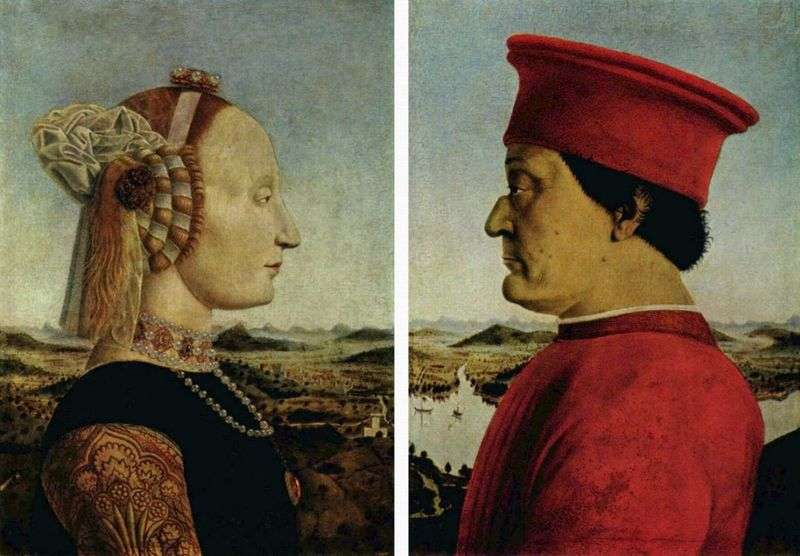 Around the middle of the 1460s, Piero della Francesca worked at the court of Federigo da Montefeltro – Count, and from 1474 the Duke of Urbino. By order of the Duke was written a famous diptych with portraits of Federigo himself and his wife, Battista Sforza. They are depicted on a background of a landscape visible from a bird’s eye view.

In allegorical compositions on the reverse sides of portraits, each of the spouses is represented sitting on a triumphal chariot, also against the backdrop of the landscape. Portraits were created in memory of Battista Sforza after her death in 1472.

These portraits are the only ones that belong to the brush of Piero della Francesca. True, he is credited with several more works in this genre, but only concerning the “Portrait of Federigo da Montefeltro” and “Portrait of Vittista Sforza” his authorship does not cause doubts. Portraits are a pair, skilfully framed by a common frame, thus forming a diptych. The date of writing portraits is still subject to art criticism. Federigo da Montefeltro and Battista Sforza were married in 1459, and some researchers believe that this “diptych” was ordered to the master for their wedding.

Other art historians date the portraits in 1465-66 years, as one of the poems of that time mentions the portrait of Federigo da Montefeltro written by Piero della Francesca. However, while the author of the poem does not say anything about the portrait of his wife, it is quite possible that in this case it is a question of another work that has not reached us. Most modern art critics tend to believe that these twin portraits were written in memory of Battista, who died in 1472, at the age of 26, six months after the birth of her last, ninth child. In favor of this theory speaks the fact that in the signature under the portraits the name Battista Sforza is mentioned in the past, and the name of her husband is in the present tense.