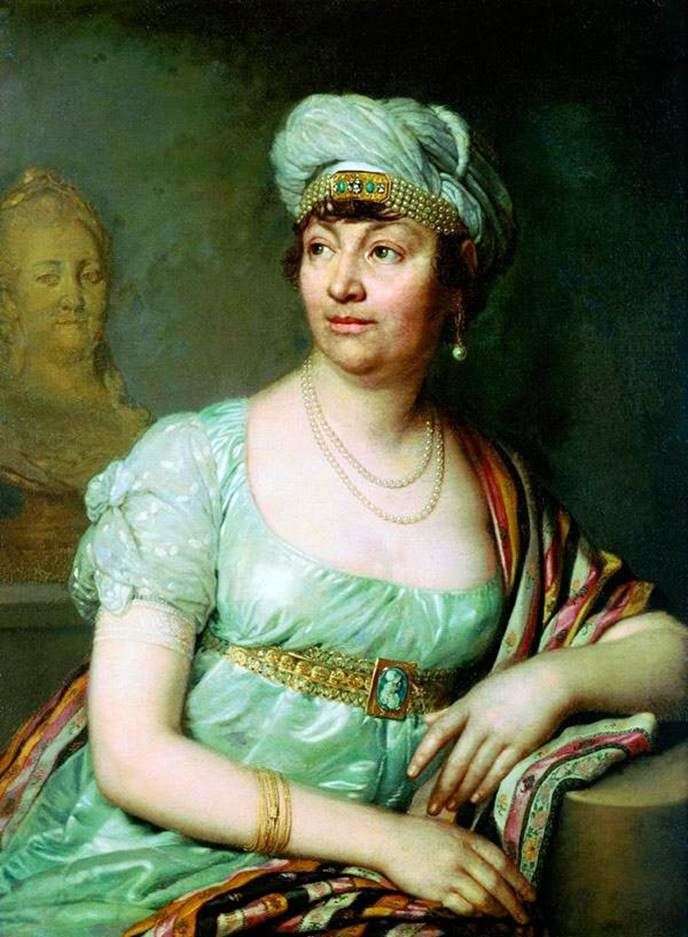 Louise Germain de Stael is a French writer. Before Germaine de Stael, no woman has played such a role in the history that fell to her. She became the master of the thoughts of a whole generation that survived the Great French Revolution.

Germaine de Stael set the stage for a romantic riot in France, her writings mark a transitional stage from the Enlightenment to Romanticism. She composed plays, novels, but more successful field of her activity were political pamphlets, theoretical works on aesthetics, in which Germaine de Stael expressed public outrage. She left one of the first historical works about her

time. The composition of the portrait is simple: a smooth wall appears as a background; in the background, behind the shoulder of the model, you can see the bust of Catherine II.

At the same time, the portrait uses subtle color relationships: it combines the rare greenish-blue tones of the dress and turban with a golden brown tinge of the belt and shawls. Alexander Benois, who saw this work wrote: “Only occasionally did Borovikovsky refuse the templates he had worked out himself, and looked more closely at nature.” Then he managed to create things that should be positively attributed to the best in general in the history of art portraits.

Such is the marvelous portrait of an unknown court lady in the collection of Tsvetkov, a rather overripe person in a l’antique hairdo, in a dress of Alexandrian time, from a silver eye, with an extremely bare chest and beautiful hands; her swarthy face breathes with passion, and with an important and daring challenge, half smiling, she turned her gaze to the side. “The writer who defended freedom of speech was in opposition to Napoleon I, which led her to exile.” In 1812, when Bonaparte had already attacked Russia, and de Stael came to Petersburg, where she was received with great honor, at which time VL Borovikovsky was able to capture it. A German poet E. Arndt wrote about Anna Luisa Germain de Stael: “.. For a woman is folded too much and manfully. But what a head this body crowned! Forehead,