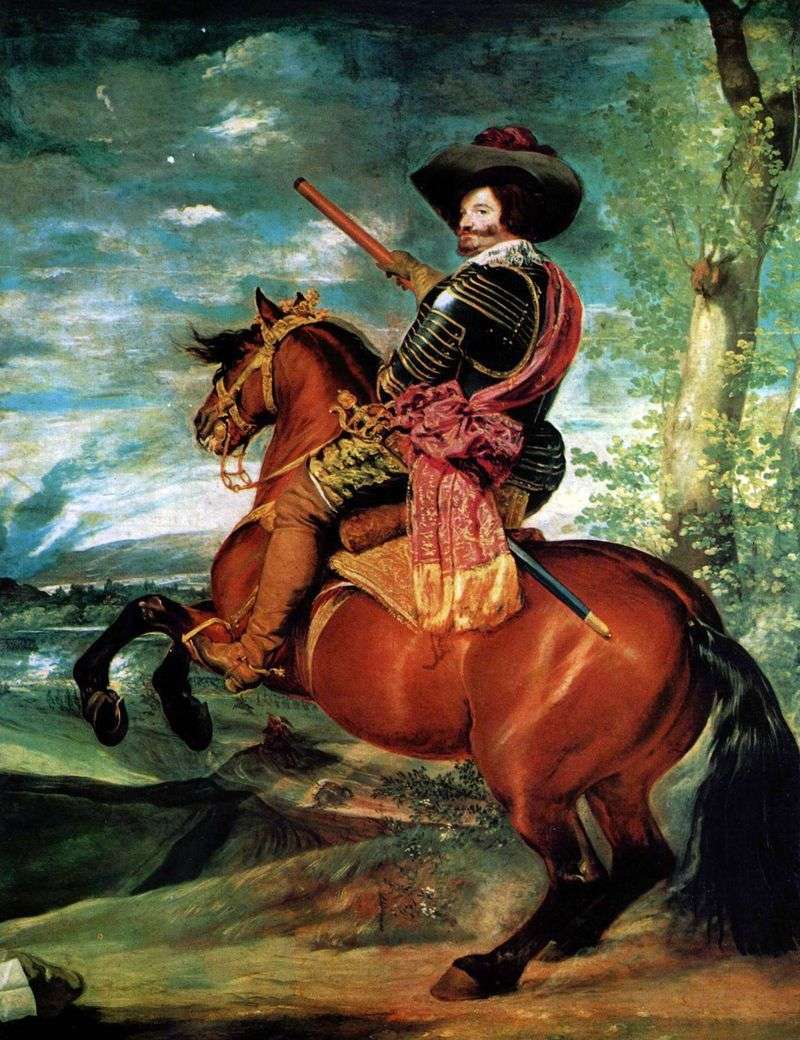 Painting of the Spanish painter Diego Velasquez “Portrait of Count-Duke Olivares”. The size of the picture is 314 x 240 cm, canvas, oil. Olivares Gaspar, Spanish statesman and politician, the favorite and first minister of King Philip IV from 1621 to early 1643; played a key role in the management of Spain and in its foreign policy.

In Seville, around which his possessions were concentrated, Olivares was engaged in philanthropy, read a lot, was fond of political science, and collected his huge library. In 1615 the wedding of the Crown Prince Philip was held. According to the customs of the Spanish kingdom, the married infante had to have its own court staff and Olivares managed to obtain a key post in it.

Being older than the Prince for 18 years, he became for him one of the mentors. Over time, Olivares enlisted the full confidence of Philip, and when in 1621 he ascended the throne, Olivares’s career was secured. He immediately became a grandee, head of the personal guard of the king, concentrating in his hands all the threads of state power. Generous royal gifts made Olivares the richest of Spanish aristocrats.

Unlike the former Prime Minister Lerma and many other favorites, he managed to keep his hands clean and relatively little abuse of his position, although he could not help placing his people on important posts. In 1622, Olivares officially became the first minister of Spain. Engaging almost all aspects of domestic and foreign policy, Olivares was responsible for all the failures.

The defeats undermined the foundations of the royal favor, and the uniqueness of the situation under the monarch, expressed in the accumulation of many posts, titles and fabulous wealth, could not but lead to the envy and hatred of those whom Olivares and his people were wiped from power. Surrounding the first minister were intrigues, Olivares was called “the hated tyrant,” and the satirical couplets that were exposing Olivares multiplied.

The intensification of economic and political oppression during his reign led to an uprising in Catalonia and Portugal. The opposition of the titled nobility in combination with the military and political failures of the late 1630s-early 1640s exhausted the credit of the monarch’s trust to Olivares, and in January 1643 the king agreed to send Olivares to resign. The former favorite was forced to retire first to his possession of Loeches near Madrid, then to Toro, where Olivares lived the last years of his sister’s palace.