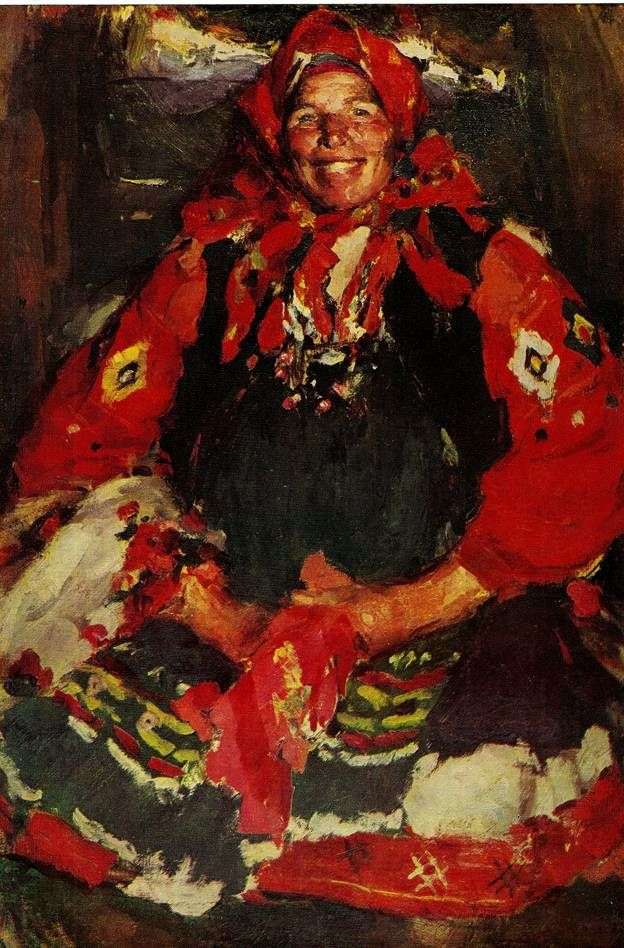 In the portrait “Peasant woman in a green apron” is no longer a young but strong and healthy woman. Fervently and cheerfully she looks at the viewer, sparkling whiteness of teeth. Overflowing it, the power playing in it, the stupefaction of nature is seen in a laughing rosy face and in a strong figure, as well as in the ringing and brightness of colors, in the evocative courage of contrasting color juxtapositions. The woman has variegated clothes – an embroidered jacket, an embroidered apron, a black velvet cap, a shiny glass bead.

The most daring colorful combinations are taken by the artist in order to emphasize the brightness and majeure of the image of the peasant woman: the jacket and shawl are red, the apron is bright green, velvet is black. In this woman there is something heroic. This is emphasized by the compositional arrangement of the figure, which occupies three quarters of the canvas and is cut off at the bottom by a frame. In portraits of this kind there are features of monumentality. This is facilitated by the very construction of the picture, in which the figure occupies almost the entire field of it.

The artist usually leaves only a small piece for the background or a generalized intended window from behind. The image is always dense or waist-deep. However, the posture never repeats, and each portrait, despite the predominance of red, crimson and pink, has its own coloristic solution. But at bright brightness of a suit to persons portrayed the artist attaches great importance. The person is not given already so generalized, as, for example, in the picture “Guests” or in some of the first pre-revolutionary images of peasant women. Keeping the whole colorful character of the costume, fascinated by its colorfulness, Arkhipov at the same time, working on the face of the portrait, reveals the plasticity of it, conveys the expression of his eyes, smiles and focuses on this.

Colorfulness does not outgrow here in external decorativeness, but only strengthens the emotional-aesthetic sound of the image. Arkhipovskie peasant women attract to themselves the simplicity and naturalness of the pose, an open face, a cheerful look. In their smile, often crafty and playful, one can see a joyful attitude to life. The artist depicts them in their familiar surroundings, although it is not always given in full concreteness. Often a portrayed depicts only an object of peasant use – a crane, a cup, a pitcher, a basket, cloth, etc.

Female peasant portraits painted by the artist in the last decade of his life a lot. They enjoyed constant success at exhibitions – both at home and abroad. VA Gilyarovsky dedicated to Arkhipov the poem “Russian Women”, in which he correctly expressed what fascinated the artist in Ryazan, Tver and Tambov peasant women who served him kindly. Gilyarovsky wrote that tanned, sun-drenched women… They are not afraid of anything – They work and laugh! – Who is more beautiful? Who is stronger? The challenge sparkles in the eyes… In them the pledge of future days. A ray shining in the vastness, The strength of my native land! Arkhipov returns constantly to these images, not confining himself to the task of giving a vivid image of visually interesting nature. In these works, one can see a desire to give a generalized image of the strength and peculiar beauty of the Russian peasantry. And whether Arkhipov writes a laughing rural young woman, an elderly healthy peasant woman, a shaggy shepherd or a frowned old man, he emphasizes in them above all the vitality, endurance, physical and spiritual strength – those national features of a national character that have always been characteristic of the Russian peasantry. But in peasant portraits, he expresses also the idea of the originality, strength, powerful life forces of the people, overthrew tsarism and destroyed the capitalist system.

In the canvases of Arkhipov, colorful, full-sounding, sparkling with joy life, the audience saw a vivid expression of the new that was born in the life and art of Soviet Russia. These paintings were the artist’s contribution to the development of young Soviet art. Consonant with his optimism of the spirit of the times, Arkhipov’s creativity responded to the demands of the new era by the fact that it came from life, was firmly associated with it and that it posed and, in its own way, solved the problem of creating the image of a new man.