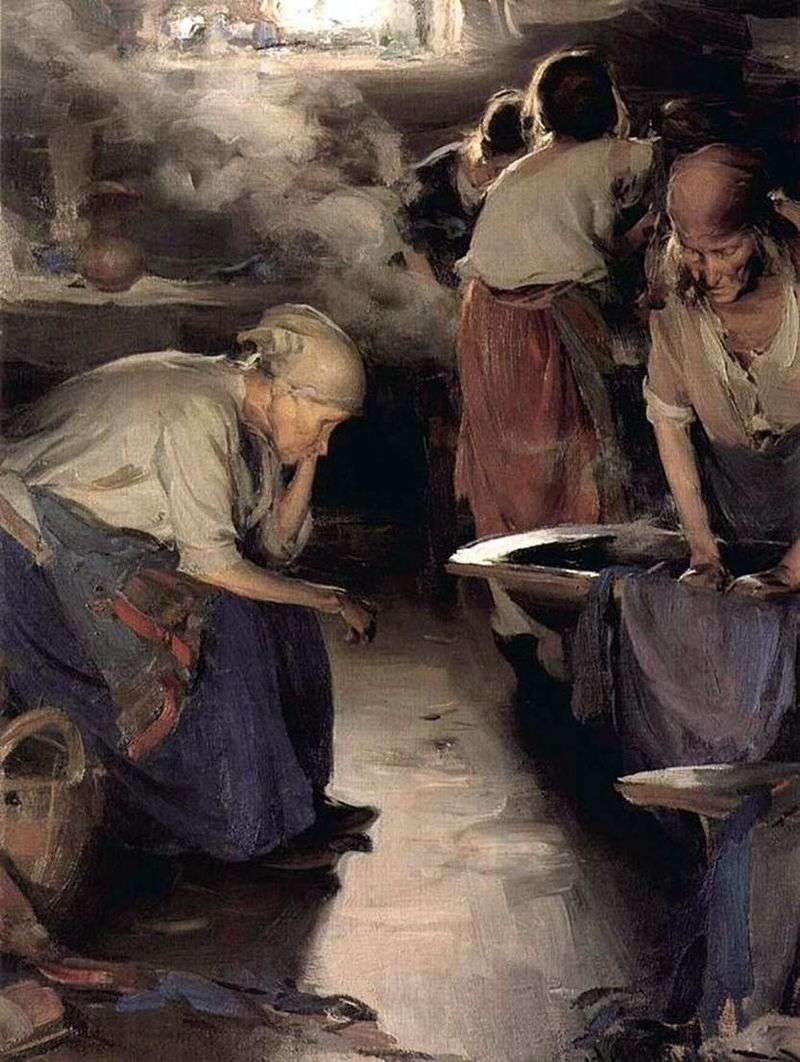 In the late 90s of the nineteenth century, all of Russia took the road of industrialization. In this regard, many peasants were forced to go on a part-time job in the city. This scene of a new urban life was accidentally seen by Abram Efimovich Arkhipov, passing through Moscow lanes in the Smolensk market area, he saw moving figures in the slightly open cellar door and felt the alkaline smell of laundry.

Looking into the room filled with steam, the sounds of splashing water and women’s voices in the room, he saw several women of different ages who washed, beat, squeezed and brushed innumerable canvases.

The artist met with women and invited them to his studio to pose for a picture. After his painting “Bikers at the Ironworks”, which had a big resonance at the XXIV traveling exhibition, the theme of the fate of a simple rural woman in Russia became for Arkhipov the meaning of all his artistic activity. Nobody so glorified the beauty and identity of the northern peasant woman as Arkhipov in his colorful and picturesque portraits of fellow villagers. It took him several years to come to the final version of this picture.

The first version depicts all women in their familiar working movements. The second option is based on the contrast of the mechanical repetition of the routine movements of working women and the motionless washerwoman in the extremely expressive posture of a fatally tired person. Faces, figures, postures and clothes are so individual that it seems you know these women long ago.

The composition of the picture tends in perspective to a small window giving a weak light, through the steam rising from the incandescent vats. Undressed faces, thoroughly soaked with sweat, steam and soapy water clothes, hair, scarves, hands and faces. All this moving mass is divided into two parts by a masterly written bright spot of wet floor. Common silvery gray with violet-purple inclusions coloring resembles an ancient icon. A virtuosic picturesque manner, thanks to the accuracy and reliability of the details, creates the impression of lightness and freedom.

On his long and successful creative path Abram Efimovich Arkhipov will write many wonderful paintings, it is enough to recall his “peasant” cycle of portraits of women in colorful northern folk dresses, but “Washerwomen” will remain a pictorial masterpiece, a value that can not be overestimated. Its picturesque, psychological and artistic value will remain the property of Russia.