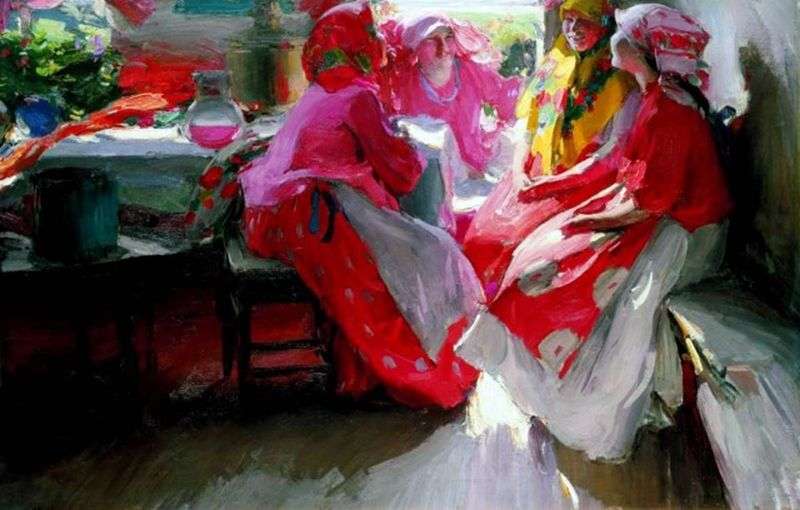 Abram Arkhipov was born in the village of Ryazan region and therefore the topic of the village can be traced in many of his works. “Arkhipovskiy” style is so unique that it is difficult to confuse it with any other. This is reflected in the grotesque movement of the brush, the brightness of the color, the saturation of the life of each of his paintings.

An example of this style of creativity Arkhipova is his work “Visiting”. Each of the artist’s heroines is a beautiful Ryazan woman. It is represented by Russian rural beauty, saturated with national color.

All women are strong, ruddy, cheerful. Their majesty can be seen even through voluminous folk dresses. Arkhipov applies the principle of looping the general composition. Four figures are gathered in a circle. Their bright clothes are complemented by sunlight.

After writing the picture “Away”, the artist was so flattered by his success that he decided to put it on the opening day, but being superstitious, flatly refused to show it to anyone before the show.

“Away” was a logical continuation and completion of the previous picture “In the spring holiday.” Arkhipov looked for ways, colors, faces and, finally, reached the apogee of creativity, reducing the interior area and simultaneously increasing the number of figures participating in the composition.

The painting was really successful and became the best in the work of Arkhipov of this period. Pupils, who were many, sincerely praised the artist’s work.

Arkhipov was interested in artists and art historians of that time. KF Yoon gave a short but capacious characterization of his work. He personified him as a lover, a national poet, nurtured by Ryazan songs, village girls, who can “write vividly” and gives his soul to his art of painting.