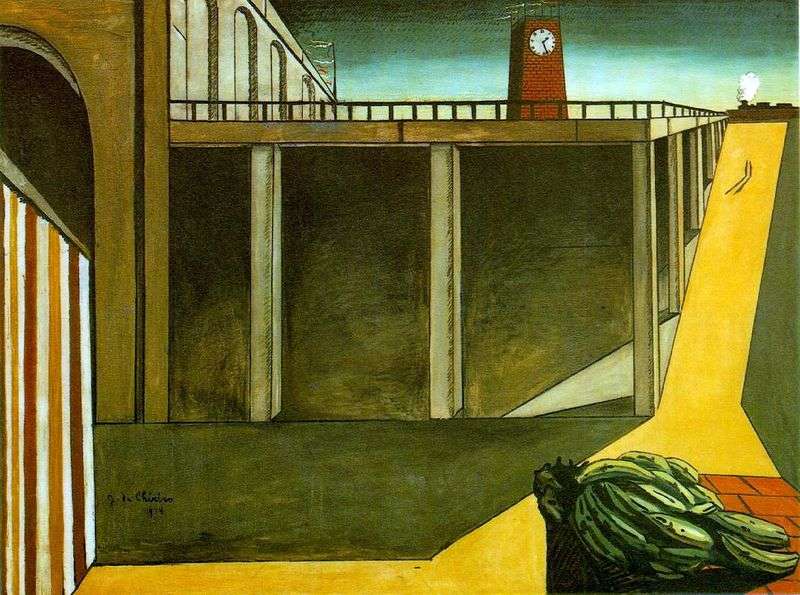 This work arose during the first stay of de Chirico in Paris in the summer of 1911, when, having presented his works at the Autumn Salon and the Salon of Independent, “he managed to surprise those who were accustomed to everything and little-wondered fellow artists, as well as spectators.” The motif of the railway station was then fascinated by the artist. He caused anxiety and anxiety, recalled the first trip – the departure from Greece after the death of his father.

When creating the canvas in kind, one of the Parisian railway stations near Rennes Square served. However, there is very little left of the real station in the picture of Chirico. The work is distinguished by perfect geometric simplicity, which does not calm the viewer, but, on the contrary, strengthens his anxiety, anxiety and nervousness.

The artist boldly uses sharp straight lines – perhaps, under the influence of Picasso. The picture resembles a book illustration or an engraving. “Train station Montparnasse” refers to the metaphysical period of the artist’s work. De Chirico embodies in her his reflections on time. These reflections are reflected in several visual contrasts. The large arch on the left is an element of classical architecture. It opposes the design occupying the central part of the image – either a platform, or a terrace, resting on piles. These square columns are made of concrete and are clearly contemporary to the author. But that is not all. Strictly vertical smoke from the pipe of a locomotive frozen in a motionless landscape says that time has stopped. And the flags on the tower and in the depths of the landscape tremble in the wind.

To the graphic series is added the play of words – in French, “time” and “weather” – synonyms – “le temps”. The space of the painting is divided into two contrasting parts, symbolizing two different worlds. The composition seems to be built on two horizon lines. The basic element of the interior space, reaching the base of the concrete piles, is a bunch of bananas. These two spaces are united by a beautiful, geometrically straight yellow road, on which are seen two small human figures.

Mysteriousness and anxiety – such a feeling creates a multiplicity of points of departure prospects. The impression is enhanced by the smooth and dry painting. This is the largest work of the artist. At one time, she made such an impression on Pablo Picasso that he called the author “singer stations”.