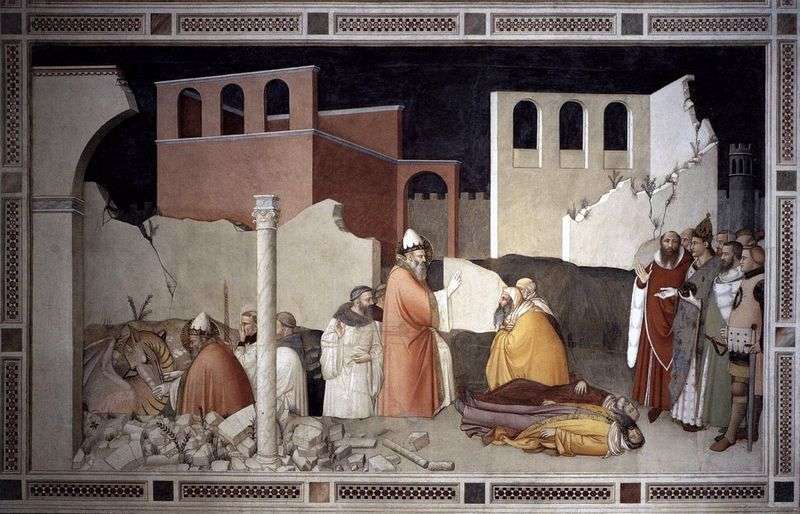 On the left is a picture of a miracle with a dragon, and on the right is the resurrection of two men killed by a poisonous dragon’s breath. The scene takes place in Rome, in a picturesque setting, among the ruins of the Roman Forum. The former greatness of Rome is reminiscent of the huge, bare walls with empty openings of windows hanging in the background. The deep space of the picture is divided into three parts.

On the left, the collapsing arch and the lonely standing antique column create a separate frame for the scene with the dragon. Here the pope fetters the dragon hiding among the ruins of the Capitol, and a little to the right we see the following event: the Pope solemnly blesses the dead magicians and resurrects them. Maso is not a drama master, he simply expounds events.

In the center of the picture, the majestic figure of the pope resurrecting the dead is underlined and the arch of the gate in the background. His image is restrained, but it’s not the Gott’s monumentality and power. Maso is interested in the image of the inner world rather. Standing right emperor Constantine and his retinue also shook the miracle they saw. The colors here are paler than those of Giotto. The picture to the left is illuminated by a strong light. The red tone of the papal cloak is enhanced by the dazzling white color surrounding it. Two scenes, following in time one after another, are separated not only by the white column, but also by the fact that the participants of the two scenes stand with their backs to each other.

At the same time, the background architecture seems to connect these two events. The picture is based on a composition compiled around the central axis and on a single angle. This axis is also emphasized by the figure of the blessing pope. Placement of the group on the right strengthens the illusion of the depth of space.