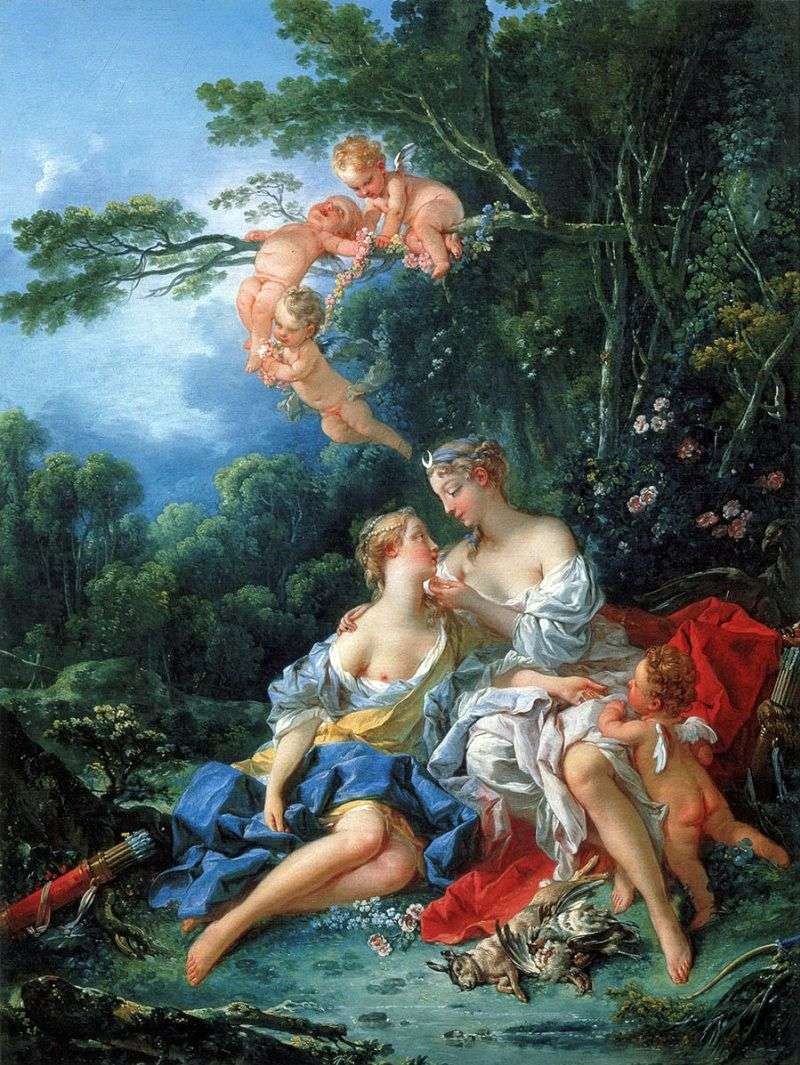 The painting by French artist Francois Boucher “Jupiter and Callisto”. The size of the picture is 98 x 72 cm, canvas, oil. In the 20s and 30s of the 18th century, the Rococo style developed in France, reaching its heyday by the middle of the century. The style of life of this time is characterized by a desire for luxury, sophisticated, whimsical forms.

The peculiarity of painting rococo – its close dependence on the architectural and decorative environment. Easel painting was created at this time primarily as a detail of decorating the interior of the noble residence, along with furniture,

porcelain, tapestries and silk fabrics. The most striking artist of the Rococo style was Francois Boucher, who, in addition to painting, worked in all types of decorative and applied art: he created cardboard for tapestries, painted fans, sketched sketches for Sevres porcelain, performed miniatures and decorative murals of interiors, was a talented engraver and sculptor.

In the film “Jupiter and Callisto” Francois Boucher addressed to the “Metamorphoses” of the Roman writer Ovid, retold the myth about the god Jupiter, who, having fallen in love with the nymph Callisto and wishing to seduce her, took the form of the goddess Diana. The artist interpreted the sensuous episode of ancient mythology in a characteristic rococo superficial, playful spirit. Graceful, graceful figures of his ancient heroines are like porcelain figurines.

Boucher liked light painting and preferred smartly dressed in blue, pink and green tones. Callisto – in Greek mythology, the Arcadian, daughter of Lycaon, was among the companions of Artemis, the hunter, was converted by the wife of Zeus, the goddess Hera to the she-bear for the non-preservation of virginity and for giving birth to the god Thunderer Zeus Arkas and Pan. When Arkas, brought up by Maya and Hermes, who did not know Callisto after his birth, wanted to kill her, Zeus moved both to the sky with constellations: Callisto – the big Bear, Arkas – Arcturus.

Persecuted by her anger Arcadian Callisto, the goddess Hera deprived her of the opportunity to refresh some of the day in the waves of the ocean; so the big Dipper never comes.