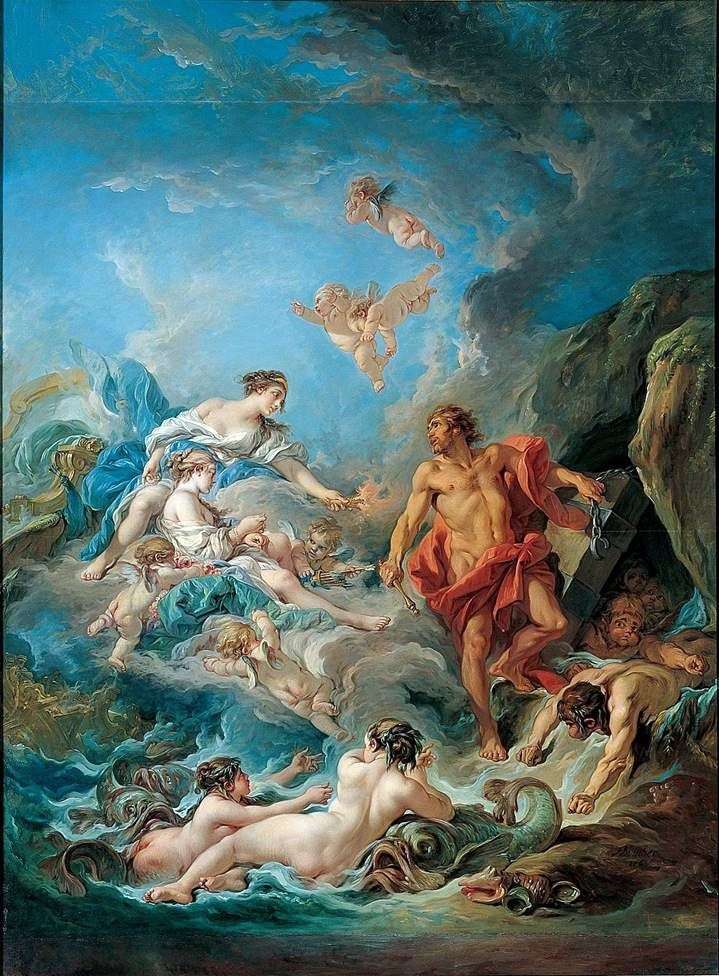 A painting by the French artist Francois Boucher “Juno visits the guardian of the winds of Aeolus.” The size of the painting is 278 x 203 cm, canvas, oil. As described by the Roman author Virgil in the first book of the Aeneid, the goddess Juno, devoured by jealousy towards Venus, intrigued in every way to prevent the arrival of the fleet of her son Aeneas to the shores of a settlement founded by Trojans in Italy.

In the description of this ancient myth conveyed to Bush, Juno visits Eola, the keeper of the winds, and convinces him to release them, thus triggering a storm and a violent storm that

would sink the fleet of Aeneas. As a payment for the service and as a temptation, Juno offers Aeolus his most beautiful nymph, Deiaopia.

Juno directs the torch of passion directly to the heart of Aeolus, while Cupid prepares an arrow designed for the passion and obedience of a nymph whose wrists are connected with pearls. Insanely in love Aeolus, listening to Juno, is ready to release a host of winds.

The presence of the charming sea nymph and the naiad, located in the foreground of the picture, indicates that the mighty Neptune, the god of the sea, will not let the winds sweep, and soothe the seething elements of the sea. Juno, in Roman mythology, one of the supreme goddesses, the wife of Jupiter. Corresponds to the Greek Hera. The goddess Hera, in ancient Greek mythology the queen of gods, sister and wife of Zeus; patroness of marriage. The daughter of Kronos and Rhea. It is distinguished by power, cruelty and jealous disposition. Hera pursues with her hatred the lovers and children of Zeus.

In retaliation for Zeus, who gave birth to Athena, Juno gave birth without his participation Hephaestus. Aeolus, in Greek mythology: the ancestor of the Aeolians; lord of the winds. Eolians, one of the main ancient Greek tribes. The settlement center is Eastern Thessaly, from where the Aeolians at the end of the second millennium BC spread throughout Thessaly and Boeotia, then in the northwestern part of Asia Minor.