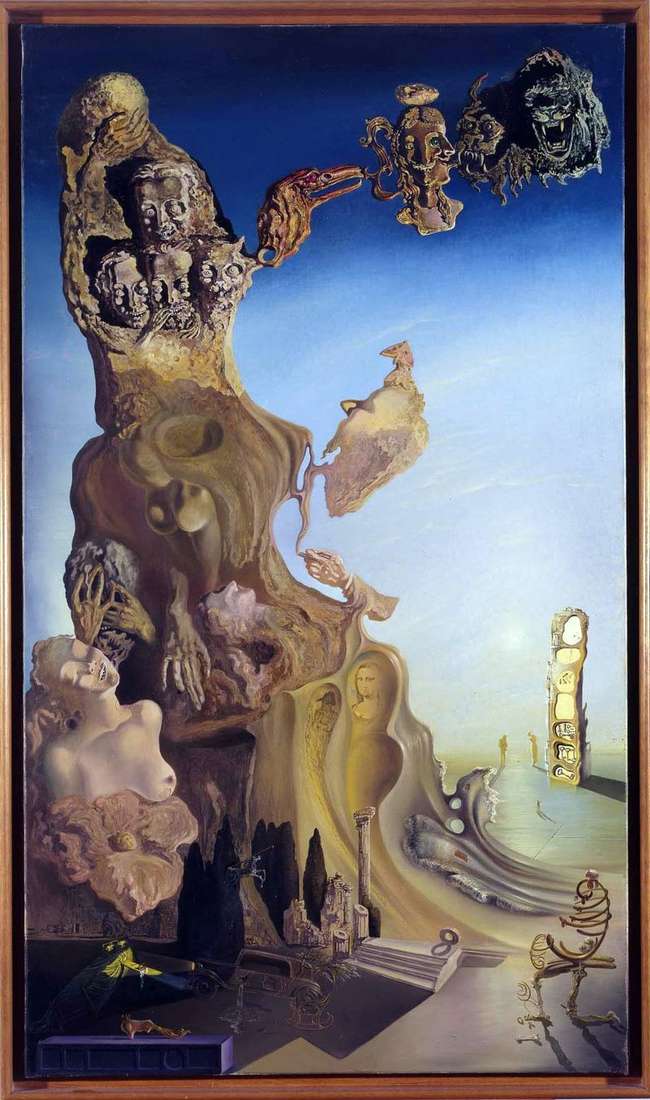 The painting “Imperial monument to a woman-child” is a vertical canvas, oversaturated with details. The monument itself has a distinctly phallic shape. The upper part of it is as if carved from sandstone. The relief, freed by the sculptor’s cutter from the texture of the stone, seems almost tangible.

Dynamics of the canvas is added by clouds, smears repeating the bend of the upper part of the monument; they balance the composition on the right side of the picture.

The palm supporting the rounded form on the top of the monument is clearly a tribute to Shakespeare’s poor Yorik. The sculpture curves to the right, revealing a chain of disturbing images and obsessions to the viewer. The conglomeration of phantasmagoric heads is an allusion to a bas-relief with four American presidents on Mount Rushmore. Then – the head of an eagle with a predatory beak. Next – the head-candlestick: the face in profile, flowing into the face full face. The head of a lion with a bared mouth. The middle part of the picture is an insane mix of hands, heads, buttocks.

At the base of the monument is a bust of a woman with bare chest resting on an open flower. The woman’s eyelids are closed, her mouth is half open. On the ground at the foot of the monument are the ruins of an ancient temple. In the left corner is an old car; the light of its headlights with a bright yellow brushstroke attracts the spectator’s eye, snatching a wobbly bridge over the abyss from the darkness. The finishing touches in this temple of triumphant eclecticism are the silhouettes of Napoleon and Mona Lisa.

In the lower right part of the picture is a shelf; on his shelves – a collection of keys. The space up to the horizon is paved with stone slabs. In the distance, on the border of visibility, are tiny human figures.

In fact, this is a monument in which the artist captures the impression of his own inner world, shocked and agitated by the invasion of Gal: wife, mother, muse, child in one person. In this woman for Dali was a whole string of hypostases, which, in turn, gave rise to a heap of images, painted in the colors of anxiety, uncertainty, lust.