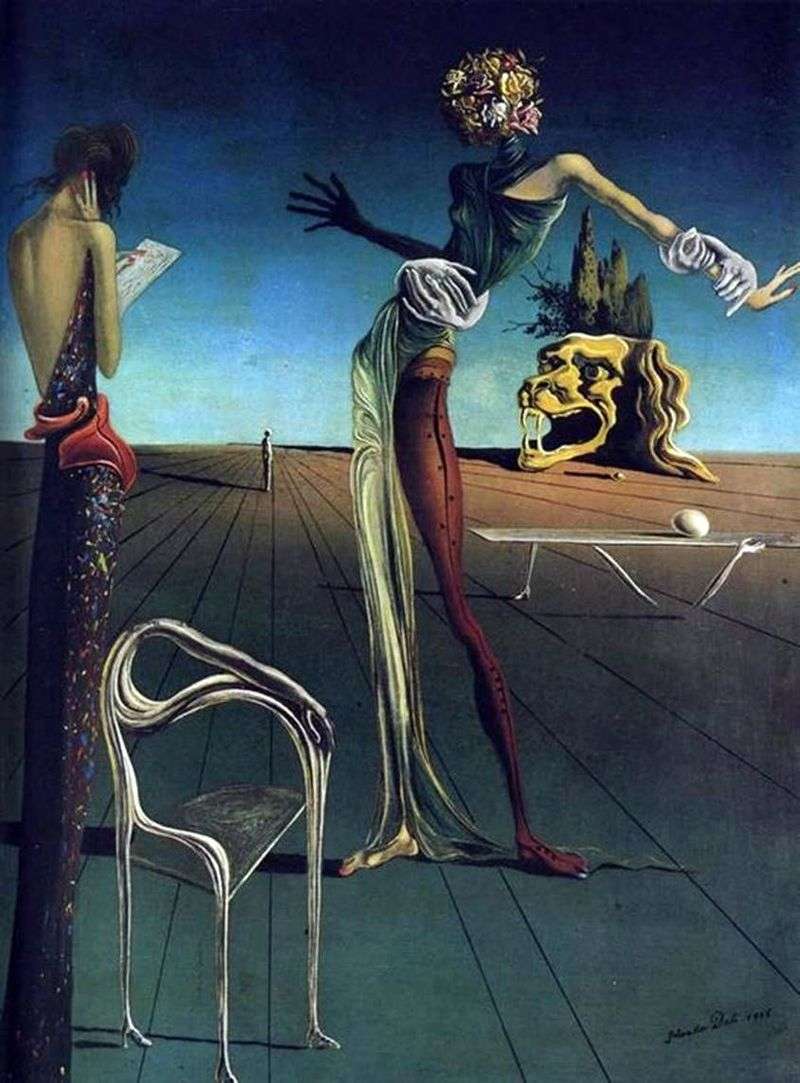 There are a lot of symbols in the picture, and also it is filled with fears and expectations of the artist at the same time. The background of the canvas is the sky in the stars before dawn. And in this pre-dawning time, two friends are engaged in an ordinary women’s business: trying on a new decoration.

Clothes are not quite ready yet, and the fabric, falling down, turns into strong hands of a man who does not want to let go of a refined figure. One of the girlfriends leaned in thought over the sketch of the next attire. The models are very delicate. Their fragility is emphasized by the egg that is seen on the white plate.

In the background of the canvas, the situation is much more interesting. Here, a small figure of a man in absolute solitude examines the head of a dog, on the crown of which the rocks. Here everything is symbolic: the rock is a barrier in achieving the goal, the head of the dog is devotion, which often frightens. Such difficulties always get in the way of a man’s relationship with the beautiful half of humanity. On the one hand – they have a fear of sin, and on the other – the possibility of temptation.

However, the illusion will soon be destroyed – the sun will rise. After its rise, the shadows will disappear, the figures of the women will be returned to the features of the earthly man. And, of course, there will be no fears that may come back.

The color palette of the canvas is very wide, all the colors of the work are joined by the dress of the lady working on the picture. But the bright red belt reflects its inner essence.

Creating the canvas, the artist is experimenting in the field of fantasy. All the items in the picture are symbols.

For example, the head of one of the heroines is woven of flowers, which emphasizes the fascination, as well as the illusory nature of the posing model.

The picture is filled with the void of air. All objects are in the same plane, but the horizon is empty.

In her work, Dalí hints at the fact that the dress will never be sewn. This is an original attempt to show the continuity of the relationship between true beauty and humanity.