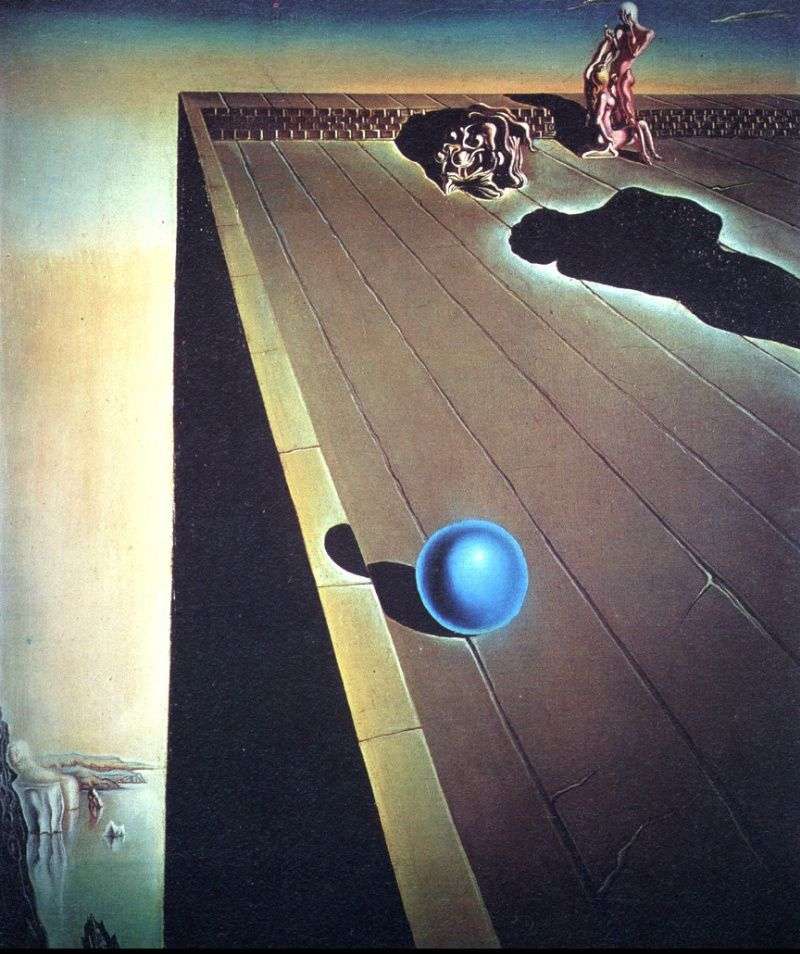 Spicy scene on the roof of a tall tower. The timid morning sun, bashfully lighting a loving couple, draws out the shadows. The head of a lion, as a symbol of an all-consuming passion, seems to guard people who have forgotten about everything in the world from extraneous views. The blue ball – the color of light feelings, sincerity and trust – distracts the viewer from the lovers, emphasizes the chastity of what is happening.

The biggest shadow is cast by someone invisible to the viewer, but significantly affecting the atmosphere of the picture. The artist thus denotes the presence in the work of society, condemning, sanctimonious, implacable, burdened by numerous prohibitions. The man shyly covers his face, trying to shield himself from the direct and uncompromising gaze of the crowd. A woman does not pay any attention to interference.

The very tower in the picture can be a symbol of those social decencies, foundations, laws, which humanity has erected for itself during its entire existence. What is happening goes beyond these foundations. The tower is strong, composed of strong, perfectly fitted blocks. True, there are cracks in some places. They are few, very few.

The tower is still standing for more than one millennium, but time has already begun its quiet, but inevitable work. The lifeless landscape at the foot of the tower is quiet and faceless. Outside the tower there is no life. The author offers his understanding of the framework of morality and the extent to which society interferes in these complex and intricate problems.

Selecting the ball from the general color scale of the picture, the master calls for perceiving external manifestations through an assessment of the inner essence of certain phenomena. Proceed from the positive in assessing the actions of others. In the shadow cast by the “invisible”, you can also see signs of some kind of embarrassment.

The composition is structured in such a way that the viewer is outside the plot, he is an outside observer. In this situation, the public feels freer, having the opportunity to evaluate the plot “from the side.”