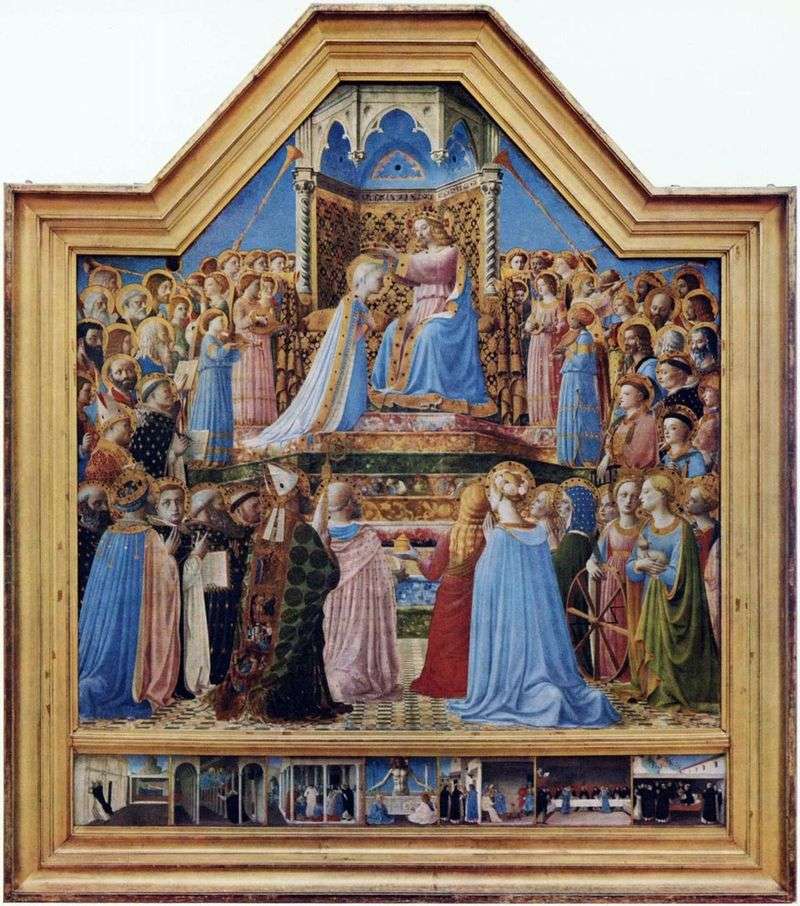 This plot forms either the final and culminating scene in the narrative cycle of the life of the Virgin Mary, when he follows the Death of the Virgin Mary and taking her to heaven, or – more often – gives her an image in the form of a prayer image – the personification of the Church itself.

This last type of image of the coronation of the Virgin Mary was born in the bosom of Gothic art of the 13th century, and it can be seen most often in the sculptural decoration of the portals of the French cathedrals. Later it occurs in paintings created especially for the altars of churches dedicated to the Virgin Mary or belonging to the monastic orders that enjoy her patronage. His most common form shows the Virgin Mary sitting next to Christ, who puts a crown on her head.

Another option: the Virgin Mary stands before Christ on her knees. Or she gets a crown from God the Father or from the Trinity. In the latter case, Christ, God the Father and the dove are all present, and the crown is usually worn by Christ on her head. He can hold one hand on a book on which it says: “Veni, electa mea, et in thronum meum” [“Come, my lady, and I will put you on my throne”]. The Virgin Mary is usually richly dressed – in accordance with her role as the Queen of Heaven.

The central group is often surrounded by a choir of angels, perhaps with musical instruments. Many figures can be present: the patriarchs, the Church Fathers, the Great Martyrs and other saints of the Christian world. The latter, especially when they are accompanied by kneeling priests, have the same function as in the stories of “Sacra Conversazione” with the Virgin Mary and the Child.

In the art of the Counter-Reformation this theme tends to be replaced by the plot of the “Immaculate Conception”. As a narrative story, she often accompanies the scenes of the apostles gathered together, standing around the empty coffin of the Virgin Mary.

The last scene from the life of the Virgin Mary is her acceptance by her Divine Son in Heaven and the calling of her by the Queen of Heaven. It is believed that the forerunner of the coronation of the Theotokos was the following episode from the life of Solomon: after the death of David, Solomon becomes King of Israel, and Bathsheba, Solomon’s mother, comes to him and asks for his protection. “The king stood in front of her, and bowed to her, and sat on his throne.

The throne was also placed for the mother of the king, and she sat down on his right hand. “The subject-themed images of the coronation of the Virgin can be distinguished from the allegorical images of the Virgin Mary in that the first events of the last days of the Virgin on earth, including the deathbed, the tomb, and lamenting her apostles and close people.

Madonna, the worshiper of the Infant Christ. In these pictures, Mary is depicted kneeling before the Child Jesus. This scene is sometimes depicted in conjunction with the scenes of the Nativity of Christ.