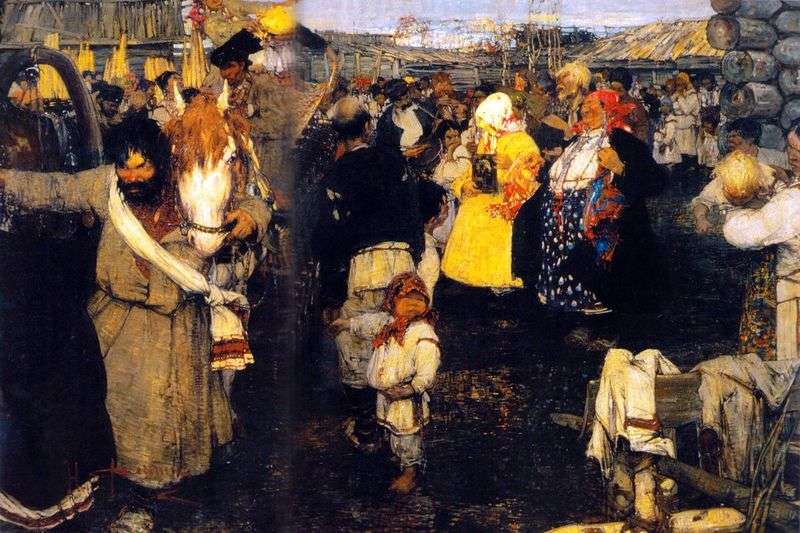 Throughout his creative life Nikolay Feshin showed great interest in ethnography. The artist was interested in pagan customs and primordial folk rites, which served as a spiritual memory for a person, which connected him with his roots and his past. It is no accident that, therefore, turning to genre works, he chose scenes of folk festivals, celebrations, national and family holidays for their embodiment on canvas. One of these scenes – the rite of the bride’s removal from the parental home – Nikolai Feshin depicted in the painting “Cheremiss wedding”, written by him in 1908.

Against the backdrop of an unpretentious rural landscape, wooden houses and thin young birches, an impressive ceremonial action opens up, with all the villagers from small to large. In the center of the picture is the bride. She is wearing traditional white clothes, her face is closed, her fragile hands are holding the icon. On the right side of the girl there is a matchmaker, and behind her – numerous spectators, relatives and musicians. To the left of the bride – a cart with a groom sitting on the goats, ready to take away their young wife. Heavy, stout man restrains his horse. He hardly succeeds in this, because he is very drunk, however, like the overwhelming majority of the gathered.

The main character in the picture can not be singled out. As in many other genre works, in the “Cheremiss wedding” each character is presented not as an independent image, but as an inseparable part of the overall action.

Unlike his mentor I. Repin, Feshin does not impose on the plot acute socio-social burden. For him it is important not to “morality” what is happening, it is important – to capture the moment, to catch a moment, to show a certain type. And the work “Cheremis wedding” once again serves as a confirmation.

The painting was presented by the artist in 1909 at the Spring Academic Exhibition, where he won the I Prize for them. A. Kuindzhi. Subsequently, it was decided to demonstrate work at the Munich exhibition. Here the picture failed to repeat the first success – critics’ reviews were negative, the canvas and the simple public did not accept.

But in the end, the fate of the picture was happy. In 1910, the financier U. Stimmel bought it from the Carnegie Institute exhibition. “Cheremis wedding” was the first work of a Russian artist, the collection of paintings which later will be the main hobby of Stimmel.