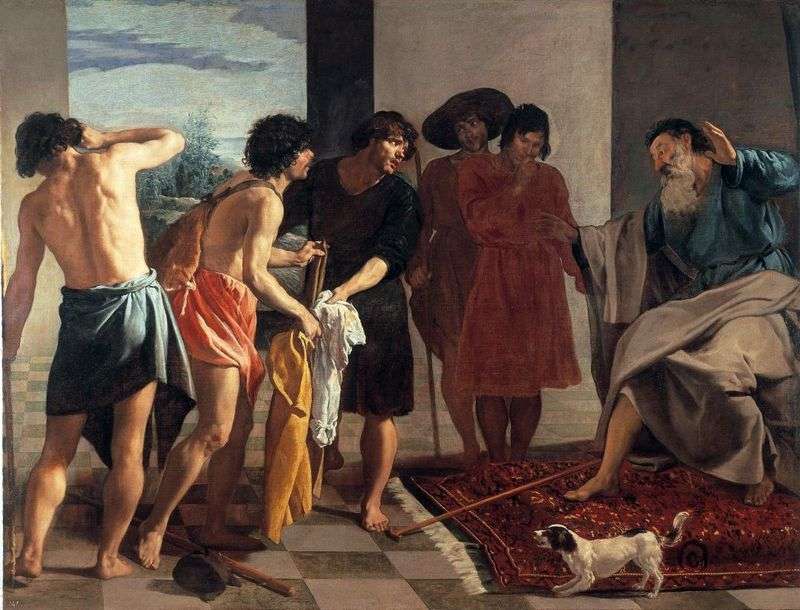 Painting of the Spanish artist Diego Velazquez “Bloody Joseph’s cloak bring Jacob.” The size of the picture is 223 x 250 cm, canvas, oil. Joseph, in the Bible – the son of the patriarch Jacob from Rachel, the hero of the biblical epic. As a beloved son of his father, he was hated by his elder brothers, who even wanted to kill him, but accidentally passed the caravan of the Ishmaelites or Arabians decided his fate differently.

Joseph was sold by brothers to caravans for 20 pieces of silver. To the father of Jacob, the brothers brought Joseph’s bloody cloak with the news that he was dead. Joseph was sold by caravans to slavery in Egypt. There Joseph, after heavy trials, reached the position of the supreme minister of the richest country of the ancient world, which he saved from the calamities of his famine by his wise forethought.

When his brothers arrived in Egypt for bread, Joseph opened to them and moved his entire family, with his elderly father at the head, to Egypt, where the pharaoh took them to settle the Goshen district. Throughout his life, Joseph patronized his family, and even after the death of Jacob, when the brothers feared that he would avenge them for their former cruelty, continued to treat them with brotherly love. Joseph died at the age of 110, leaving behind two sons, grandchildren and great-grandchildren.