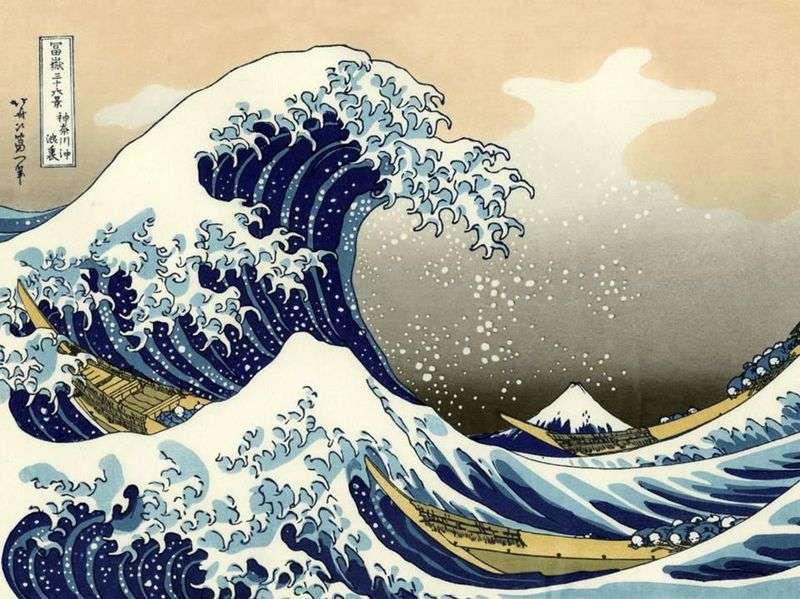 The world famous landscape “The Great Wave in Kanagawa” is a picture of the Japanese master Katsushika Hokusai and his disciples.

Prints of engraving are kept in museums around the world. One of the main criteria for assessing the “importance” of a copy is the age of the print, because according to rough estimates, 5-8 thousand copies of the wave were created. Despite the high number of copies and low cost in the 19th century, now a genuine high-quality replica will cost several tens of thousands of dollars.

The career of Hokusai lasted about seven decades. In addition to the fame, which the master achieved thanks to his dynamic engravings and illustrations of books, he was also an accomplished artist. Known for its ingenuity and skill in creating an angle and overall design of the image, Hokusai demonstrates in the “big wave” the high Fuji mountain in Japan, in the form of a small hill in the background. In the foreground is a high wave symbolizing the power of nature.

Masterful use of various shades of blue is a hallmark of many works from the series “Thirty-six kinds of Fuji”, to which this image belongs. “Berlin Azure” was used to make the composition more dramatic. By its nature, the “big wave” is not an engraving in the traditionally Japanese style, since Hokusai had the opportunity to study European works of art. The choice of color is also inspired by the popularity of azure on the continent.

If we compare the dimensions of the deadly wave and the boats in the center of the composition, we can assume that its height is approximately equal to ten meters.

Thirty years after the creation, Japanese engraving gained popularity throughout Europe, attracting even such masters as Vincent Van Gogh, Whistler and Claude Monet. In addition, the impact of prints had on other areas of art. French composer Claude Debussy was inspired by the work of Hokusai when composing the composition Sea. And the wave itself was depicted on the cover of the musical camp.

In addition, the Czech-Austrian poet Rainer Maria Rilke impressed by the painting wrote the poem “Mountain”. Nowadays emoticons based on engraving are created.