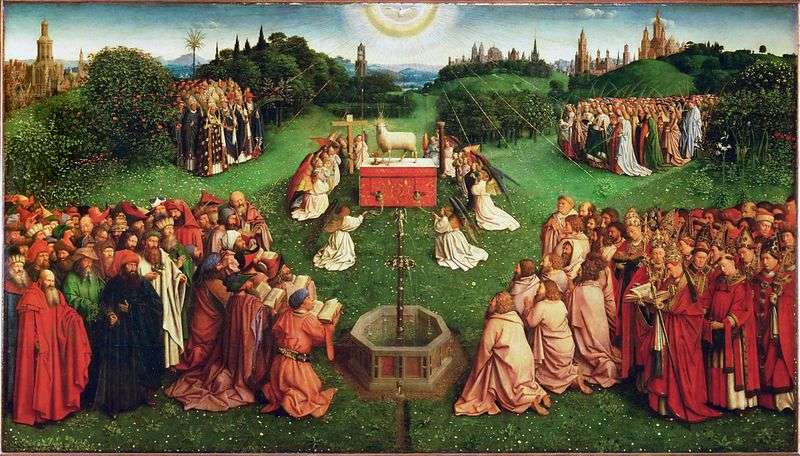 “The worship of the lamb” is the heart of the altar. There is nothing meaningful and sad in this traditional scene. The lamb, from the neck of which is poured into the sacrificial vial of blood, seems to be the product of a most skillful jeweler, and not a sacrificial lamb. In the air, as if losing touch with the gravity of the earth, the golden censers froze with which the angels with motley wings waved. Golden rays are poured in thin lines from the halo, the surrounding dove – the Holy Spirit. A scene from Holy Scripture turned into an altar in a fairy tale, a smart mystery played on a holiday on the Flemish land.

On all sides to the lamb, whose blood has turned into a source of life, the Saints, the righteous, united together and almost all, are dressed in blue, and suffering sinner slowly and solemnly approaching. In their hands – palm branches, in the hair – flowers. Such were the traditions in some sacred ceremonies.

Right and left – soldiers, judges, hermits and pilgrims. The first plan of LEFT is occupied by prophets, philosophers, sages – all who predicted the birth of the Savior. There are also the ancient poet Virgil and the great Dante. The first plan of RIGHT is the prophets and priests of the New Testament. Some of them are on their knees, barefoot. Behind them is assembled the Hierarchy of the Church – the Roman popes, deacons and bishops, in red, with magnificent jewels.

Bright green light flooded a wide green meadow. Among the grass are lilies of the valley, daisies, light dandelions, violets, lilies, irises and other flowers. The meadow goes far into the depths, where small groves, lawns, forests and bushes grow green. In the background, blooming roses alternate with grape bushes, spruce grows next to the beech, and more – cherries and fig trees. Modern scientists counted more than 30 plant species in the Ghent Altar, so each sheet and each petal of the flower was carefully spelled out.