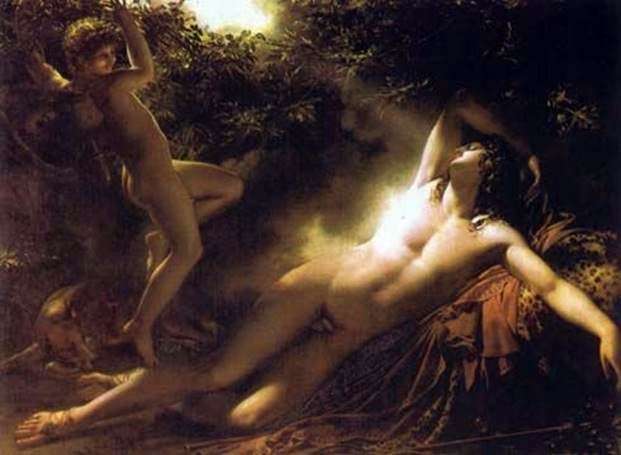 Girodo-Trioson was one of the best pupils of the famous painter JL David, from whom he studied in 1785. Girodo-Trioson also received a good humanitarian education, which was reflected in his work. In 1789 the artist received the Rome Prize and went to Italy.

Here he was impressed by the acquaintance with the works of Leonardo da Vinci and Correggio. The artist lived in an era when classicism gradually gave way to romanticism. This is noticeable in the works of Giraud, who often seem only classic in form and possess all the power of charm and mysterious attraction of Romantic painting. One of the first artists began to use the plots of contemporary romantic literary works as plots of his paintings.

“Endymion’s Dream” is one of those works by Giraudet, in which the romantic interpretation of the ancient plot fully coexists with the classic form. Endymion is the hero of Greek mythology, a beautiful youth. He was put to sleep by Zeus, who was persuaded to do this to save him eternal youth, Selena, in love with him, who later gave birth to 50 daughters from Endymion. Other famous works: “The funeral of Attala”. 1808. Louvre, Paris; “Scenes of the Flood.” 1808. Louvre, Paris; “Chateaubriand”. 1809. The Museum, Saint-Malo.