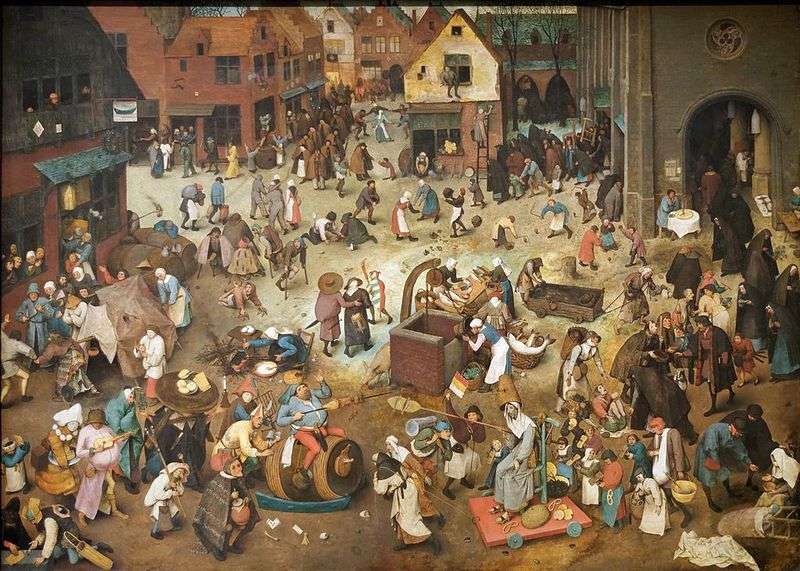 The theme of the painting is called “Inverted World”. In front of us is the square of a medieval city with a church, a tavern, houses with arched roofs. In the foreground, a clownish performance is played out: it is important that a paunchy man sitting on a barrel fights with a tall, lean figure in monastic clothes. The artist presented the single combat of the Shrovetide celebration with Lent, which precedes the most important church holiday – Easter. And the whole picture is divided into the realm of the Carnival and the kingdom of Fasting.

On the head of Maslenitsa – a closed frying pan, from which stick the legs of a fried chicken. A barrel is his horse, he turned with a piglet – his weapon. A barrel is pushed by mummers in colorful carnival caps. They are followed by a dish with waffles. Next to the barrel is a man with a pot of honey, and behind him – another, in a funny and terrible nosy mask. The solemn procession is accompanied by musicians.

A comic wedding takes place at the entrance to the inn, and curious look out of the windows. In the depths of the picture people lead a round dance and burn an effigy of winter.

The thin figure of Lent rises on a three-legged chair. Two of the nuns are carrying the Post truck. At the feet of the Post – dry cakes and pretzels. This is the meager food that is allowed to eat at this time. At the well, old women trade fish – meat is forbidden during fasting.

In the same way, the festivity flares up as it approaches the tavern, the scene grows darker and more serious as it approaches the church. Here and the legless cripples and blind. On the ground lies a child wrapped in rags, and the nun collects alms for him. Two old women are dragging a cart, out of which thin legs stick out. Wearing dark clothes and covering their heads, people enter the temple.

At first glance, it seems that before us – the events of one day, and the artist painted what he saw, going to the square on a festive day. But on what day does the action take place? At the end of February or early March, a merry carnival lasted, and then there was a fast. The first Sunday of fasting was, according to the Dutch customs, the day of carnival, when in the squares exactly such comic “battles” were presented. The branches of the willow in the hands of one of the characters indicate a Palm Sunday. At the same time, the procession of cross-worshipers leaving the church indicates that Bruegel had a passionate Friday in mind.

Bruegel with extraordinary accuracy transmits the feeling of spring. Shown typical for the spring classes: standing on the ladder, the woman washes the window. On the sill of the same house a chimney sweep sat down – with the onset of heat, he must clean the pipes in the houses. The buds swelled on the branches of the trees.

Bruegel seems to be striving to create an encyclopedia of urban life in the spring.

But in fact, there is much more depicted here than it seems at first glance.

Artists of that time in everything they portrayed put a second, hidden meaning, encrypted something that could not be talked about openly. Bruegel knew how to do this almost the best.

Bruegel did not accidentally so carefully depict episodes of visiting the church, giving alms, meager lean food. In the 16th century, the Catholic clergy became even more strict in demanding compliance with all the rules of fasting, regular visits to the church.

On the head of Post – a hive. The temple is a hive, and the parishioners are bees, it was said in Catholic sermons.

Protestants refused to observe the rules of fasting, so that the Shrovetide figure represents the Protestant church. It was not accidental on the square and the inn – the Catholics scornfully called the Protestant temples taverns. The Catholic Church forbade its clergymen to marry, and, as if against its prohibition, a wedding takes place in the picture.

Thus, the artist painted a religious dispute here. But on whose side is he? On the right, we see children playing. By their carelessness they emphasize the hypocritical nature of Catholic piety.

But the opponents also do not cause sympathy for the artist. On the Maslenitsa side, Brueghel placed two retiring figures. On the back of the man – something resembling a bag. At the time of Bruegel, the bag hinted at selfishness: an egoist, blaming the shortcomings and weaknesses of others, is blind to his shortcomings and therefore drags them with him like a sack. Next to a man is a woman with a lantern. A burning lamp was often associated with the mind that illuminates the path of man. And this lamp went out… This little couple is being led by a little clown in colorful clothes. His figure – expression of the artist’s smiles over empty and fruitless religious disputes.