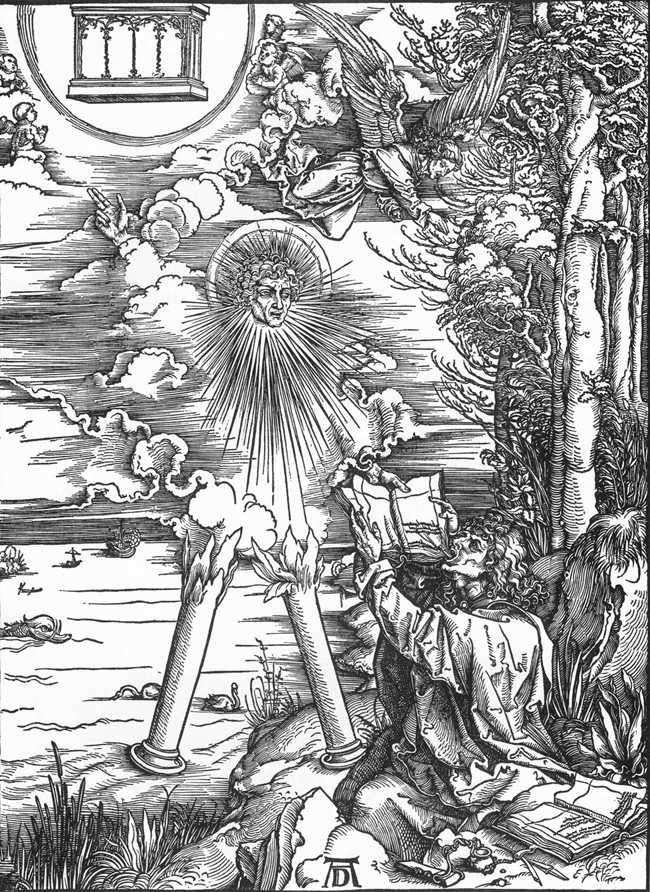 “And I took the book from the hand of the angel, and ate it, and it was sweet in my mouth as honey, and when I ate it, it bitterly began in my belly.

And he said to me: you must again prophesy about the nations and tribes, and the languages and kings of many.

Seven thunders told something to John, but a voice from heaven commanded him to hide what was said. “

For centuries, readers of the “Apocalypse” have tried to unravel these lines. And Durer had a more difficult task: not only to unravel, but also to figure out how to express their meaning in the drawing. The voices of thunders can not be visually visible, according to the sense of the mighty power created by the line about “the seven thunders who spoke with their voices,” determines the majestic structure of the engraving. The face of the angel is crowned with a rainbow and radiates sparkling rays. Hand, podyataya for vows, punches a huge cloud – in half the sky! – Waving, another – authoritatively extends the book to John.

The body of the angel Durer hid behind the radiance of the rays, behind clouds of clouds, allowing the imagination to finish it. The hands of John, wrapped around the book, rush after the hand of an angel who was taken up for an oath. This movement passes through the entire sheet, combining it with a single impulse. On the grass next to John opened a notebook. Visible pages are visible. An inkwell and a writing device are attached to the notebook.

Dürer’s predecessors denoted land and sea as almost a conventional sign. Durer is creating a visible shore. At its edge grows reeds, swim to it, bent long necks, white swans. The shore is wooded: a knotty oak grows near, in the distance there are slender pine trees.

Angel leans his feet on the sea and the earth, his head goes behind the clouds. But if the kneeling John straightened up, he would be almost as tall as an angel. And yet, in comparison with him, the angel seems huge. They can not be measured by one yardstick. They are made of different matter.

Frequent, strong condensing to black strokes creates the artist John. The face of the angel arises from the strokes of the rarer, it has fewer shadows, it is lighter and, in comparison with the face of John, seems to be non-material. And only the hand of the angel, which imperiously extends to John the book, is perceptibly bodily. It connects an imaginary celestial space in which there is a sun-like angel, and the space of the earth in which John dwells.