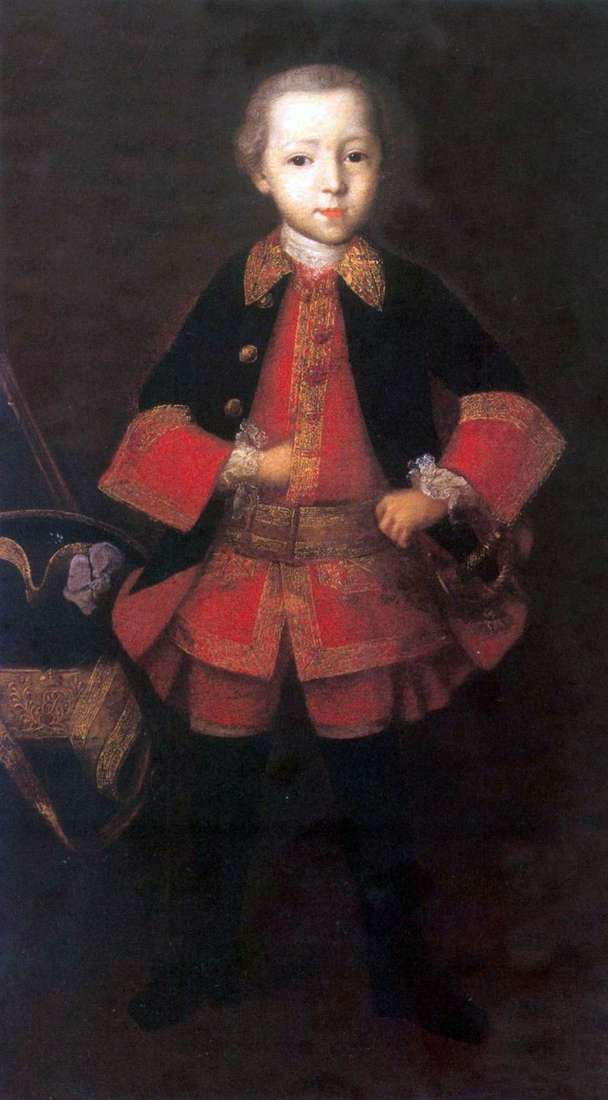 On the stretcher of the portrait of the boy Golitsyn, the surviving inscription “The book of Fyodor Nikolayevich Golitsyn at the 9th year of his age” gives grounds for dating the picture not earlier than 1758 and no later than 1760, which is by the time the last surviving work of this master. A military coat is not a tribute to the carnival fashion.

Children from noble families of noble family were even enrolled in the army at birth, so that by the time they reached the age of majority they received an officer’s rank. In previous centuries, the child was considered a small copy, a reduced version of an adult – hence the reference to “you” to the shining children and dresses, as in adults.

Fedya Golitsyn is painted in such a pose, in which military generals, who were wise and experienced in life, were usually portrayed: arms akimbo, thrusting his hand over the side of his jacket, drawn by a belt, he stands firmly on his widely spaced legs. A rifle leaning against a chair hints that Fedya in his youth is an excellent hunter; The sight of him is astute and wise, like that of a deft courtier.

Clothing, in this case, the uniform of the Horse Guards, is interpreted in an accentuated decorative manner. Color spots of dark blue, almost black caftan and red coat, gold embroidery emphasize the light tone, which is written the face and hair of the child. In the portrait of the boy Golitsyn traced the Russian tradition of portrait painting, which originated from the parsun painting of Ancient Rus. At the heart of the expressiveness of the parsuna lay the contrast of the person’s facial image and the conditional, as if flattened figure on the plane.

The artist is not yet free from the former icon-painting principles of writing: the neutral blank background is highlighted around the figure of the boy like a nimbus above the head of a saint. The transfer of volumes was also not part of the creative task: the image is deliberately flat, no gradation of color, on the contrary – as in the painting of Russian avant-garde artists, each segment has its own segment in this color.