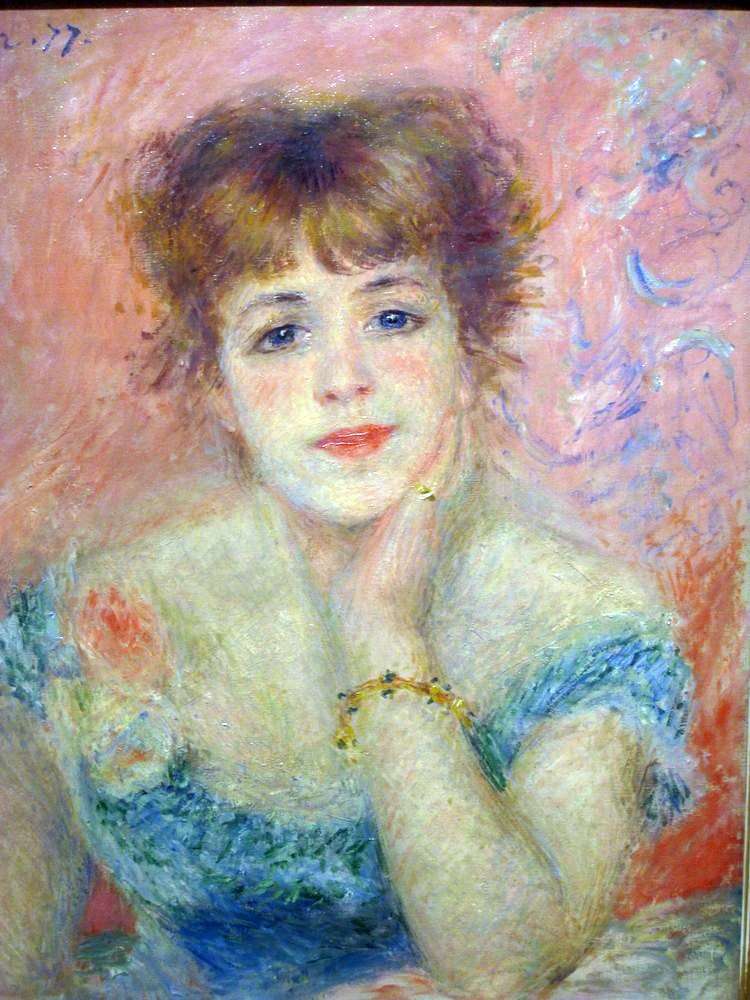 The charming actress of the Comedie Francaise Jeanne Samary has always attracted the attention of Auguste Renoir. He found in her appearance and character a special elusive charm. I must say that the sympathy of the artist was mutual. However, as the actress wittily remarked, Renoir was not created at all for the family – he was married to every woman he painted.

The small canvas became one of the most recognizable masterpieces of world cultural heritage. It makes maximum use of the principles of impressionism. True, some art critics consider it not an independent work, but a preparatory sketch for

a large, ceremonial portrait of the actress.

Zhanna Samary lived not far from the painter’s workshop and herself came to him to pose. She did it, it should be noted, quite freely and sometimes skipped sessions, which upset and angered Renoir. While working on the portrait, the artist cherished every minute – the room in which he worked was well covered only for a few hours.

Renoir’s art was as sincere as his gaze. According to the painter, “theories do not help to write a good picture, most often they are trying to cover up the lack of means of expression.” Probably, therefore, among the contemporaries of Renoir, the picture caused a serious resonance and criticism, because the artist, despite the canons of academic painting, applied strokes freely, using a rather unusual combination of pink and green flowers, which few people dared to apply. In the right part of the canvas, blue curls are immediately put on top of the pink paint; however, this does not spoil the integrity of the image.

In spite of everything, the work of the artist immediately won the location of the audience. Perhaps because both the model and the author of the picture equally perceived and enthusiastically perceived the world around. Almost all the paintings of Renoir permeated the joy of life, carefree and healthy sensuality. The portrait of Jeanne Samary is no exception. The artist was able to fully convey its natural attractiveness, mischief and immediacy.

The actress looks strikingly beautiful: her reddish-golden hair set off her face with sharply defined eyebrows, deep blue eyes and regular lines of the nose and lips. Although in fairness it should be noted that the penetration into the psychology of the model at Renoir is rather superficial. He is more fascinated by the appearance than the inner world of the actress. But this is a feature of impressionism.