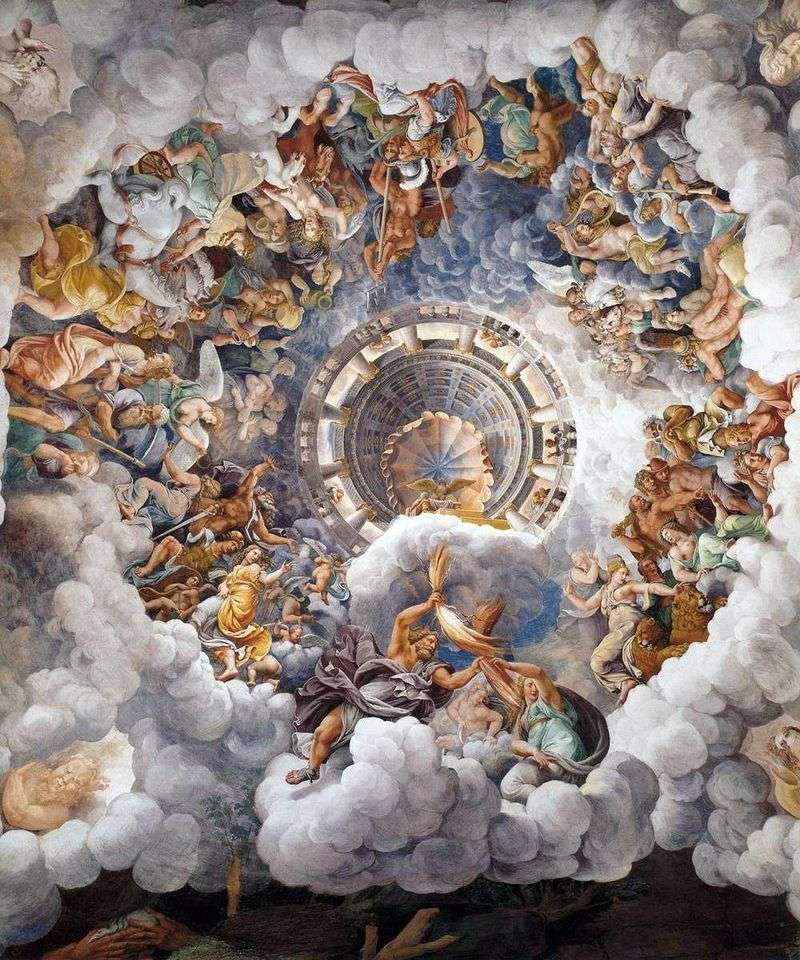 The most remarkable wall painting of Northern Italy, rich in astrological and mythological symbols, is the large-scale cycle in the Palazzo del Te in Mantua. It was created by Roman painter Giulio Pippi, who gained fame under the name of Giulio Romano. The cycle was conceived as a decorative painting of a huge country palace, built according to his own project. The palace was erected by order of the Marquis Federico Gonzaga, who was later named the first duke of Mantua. The palace takes its name from the place where it is located: the island of Te, which was surrounded by lakes and canals bordering the southern walls of medieval Mantua.

Having invited Giulio Romano to paint the walls, the Duke of Gonzaga expected from the Roman artist and student Raphael special knowledge in the field of classical art. And later Dominic Ingres was forced to admit it, exclaiming: “Giulio Romano is antiquity itself!” In the paintings of the suburban residence of the Duke of Mantua, Giulio Romano unleashes inexhaustible fantasy, turning every hall into a real surprise. The rich mural of the hall of the Giants depicts the Greek gods on Olympus.

In the center of the arch, on the left throne, sits the eagle of Zeus, and closer to the viewer, in the clouds, forming a living ring, soar the gods, led by the lightning bolt Zeus. Next to Zeus is depicted the wife of Zeus, Hera, the patroness of women and marriage. To their left is Hades, the brother of Zeus, the lord of the underworld, with arms cocked to heaven; Ares with a sword in his hand, the god of treacherous and perfidious war; Eros, the mighty god of love, is depicted as a winged youth with arrows; Aphrodite, the goddess of love and beauty. On the right, Artemis sitting on a lion, goddess of hunting, patroness of plants and animals; Demeter, the goddess of fertility and agriculture; Hercules, son of Zeus, with a club on his shoulder; Dionysus in the wreath, the god of winemaking and fertility; Hermes in a hat with wings, herald of the gods; Hephaestus with a hammer on his shoulder, the god of fire and blacksmithing.

On the opposite side of the vault, opposite Zeus and Hera, are Poseidon with a trident, the brother of Zeus, the lord of the seas; Athena in helmet and spear in her hand, the goddess of wisdom and just war; Hestia, the chaste goddess of the hearth. The ancient Greeks believed that the gods live on Mount Olympus – the highest peak of Greece, where the earth converges with the sky. They lead a life similar to the life of people, and from there they watch mere mortals.

The supreme deity of the Greeks was Zeus. Zeus is the sovereign and father of gods and people, his name means “bright sky”. Having won over his father Kron, Zeus became the sole ruler of Olympus. In honor of this event, the Lord of Lords, an almighty thunderbird, ordered every four years to hold cult competitions, called the Olympic Games as a symbol of unity and mutual consent of the Greek people.