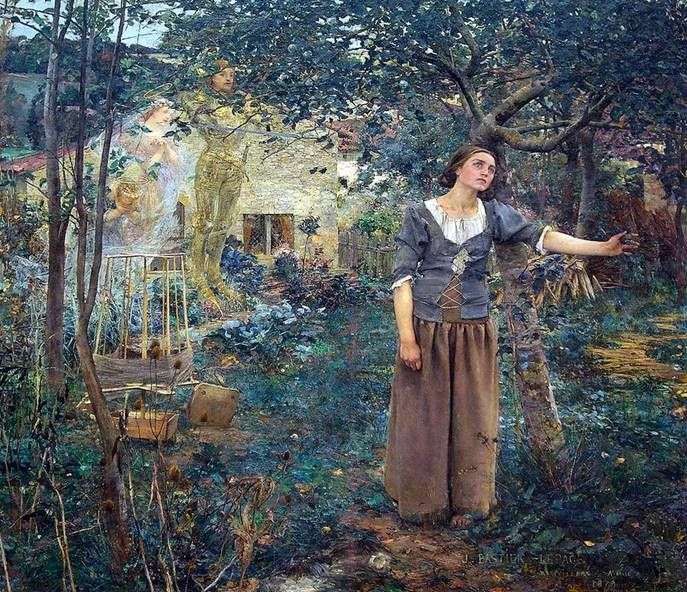 The image of Joan of Arc – “The Maid of Orleans”, the national heroine of France in the Hundred Years War. became very symbolic in France in the 1870s and 1880s. This was due to the defeat of France in the Franco-Prussian War of 1870-1871, as a result of which Lorraine. where Joan of Arc was born, went to Germany. Sculptors and artists created new sculptural and pictorial images of Joan of Arc. Jules Bastien-Lepage. himself originally from Lorraine, also decided to turn to this image, and in 1879 he painted the painting “Jeanne d’Arc”

The picture was presented to the public at the Paris Salon of 1880. In the same year, the picture was bought by Erwin Davis from New York. and in 1889 it was transferred to the collection of the Metropolitan Museum.

In 1889, the painting was exhibited at the World Exhibition in Paris.

The painting depicts Jeanne d’Arc in simple peasant clothes, standing in the garden of her parents’ house in Domremi. According to legend, it was here that she had a vision of Archangel Michael. St. Catherine and St. Margaret. who told that it was destined to lift the siege from Orleans and expel the invaders. In the picture the images of the saints are depicted floating in the air behind Joan of Arc, against the backdrop of the wall of the house.