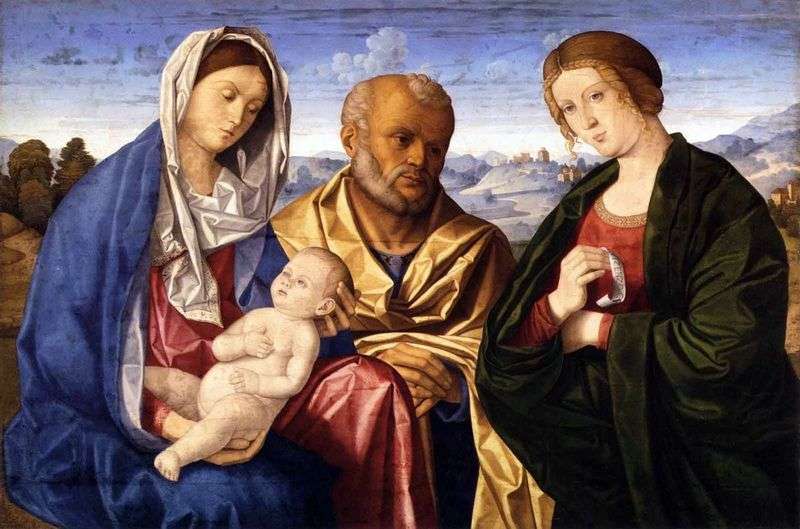 Donated by Janos Laszlo Pirker in 1836. Catena went through a development path typical for the pupils of the late Bellini. At the beginning of his work he followed his teacher in everything, imitated his style, used his compositional principles, adopted even separate figures, often leaving them without any change.

But with the advent of the first mature masters of the Renaissance, he broke with this tradition and became a follower of Giorgione, Palma Vecchio and Titian. The images of Mary and the baby on the picture presented here, he adopted, making small changes, with one picture of Bellini, but the writing of the head of St. Joseph is influenced by German artists. All art historians unanimously consider the Budapest picture as one of Catenas’ early works, the exception being F. Heinemann, who attributes it to an unknown artist from the same workshop as Caten, under the conditional name of Vincenzo di Girolamo.

In favor of the early dating of the picture speaks not only of Bellini’s strong influence in her, but also that she does not feel the influence of the art of the High Renaissance at all. Unfortunately, Catena did not put dates on his works, and only his altar picture “Saint Christina” from the Venetian church of Santa Maria Mater Domini can be dated 1520, and then only on the basis of various auxiliary data, and the picture “Madonna Loredano”, stored in Venetian Museum Correr, can be dated 1501-1504 years.

The Budapest picture also refers to this time and continues an endless series of paintings on the theme of Sacra Conversazione with their simple, symmetrical composition. On the paper tape, which holds the holy wife, is the signature: VICENZO S. R.