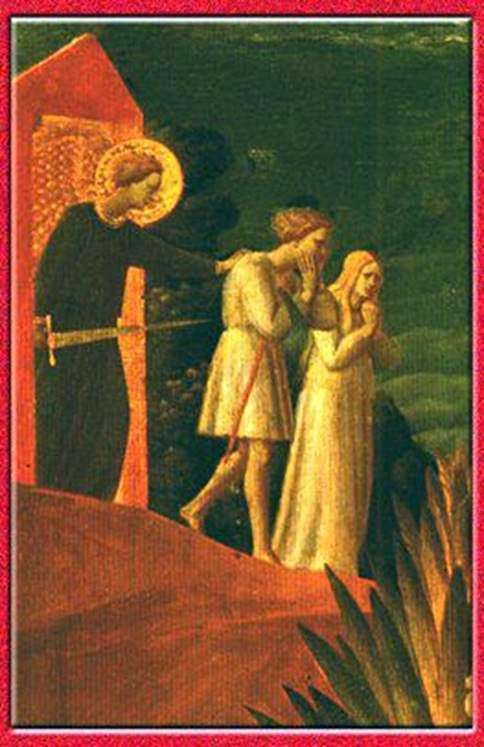 The Bible does not say that the ancestor was expelled from paradise by an angel: God “expelled Adam and placed in the east near the garden of the Eden cherub and a fiery sword inverting.” Traditional interpretation of the plot, inherent in medieval art, persisted even in the era of the early Renaissance.

Let’s look at the amazing “Annunciation”, written about 1434 by a Florentine artist, a Franciscan monk Fra Beato Angelico. When the spectator looks away from the golden-winged angel and the virgin Mary, who reverently hears him, he sees in the upper left corner of the picture the scene of exile from paradise almost merging with the landscape.

In Fra Beato Angelico, an artist of peace and enlightenment, this scene is not as dramatic as it is sad. The angel does not glow with anger, does not raise his bellicose sword. He almost paternally put his hand on the shoulder of inconsolable Adam, not banishing, but as if sympathetically escaping the sinful couple from the heavenly gates. In the first third of the 15th century. In parallel with the canonical, a new approach to the image of the ancestors appeared.

Gradual breakdown of the medieval worldview took place: the humanists asserted new ideas about nature, about man and his place in the world, and the images of Adam and Eve began to interest artists in themselves, and not only as the embodiment of original sin.