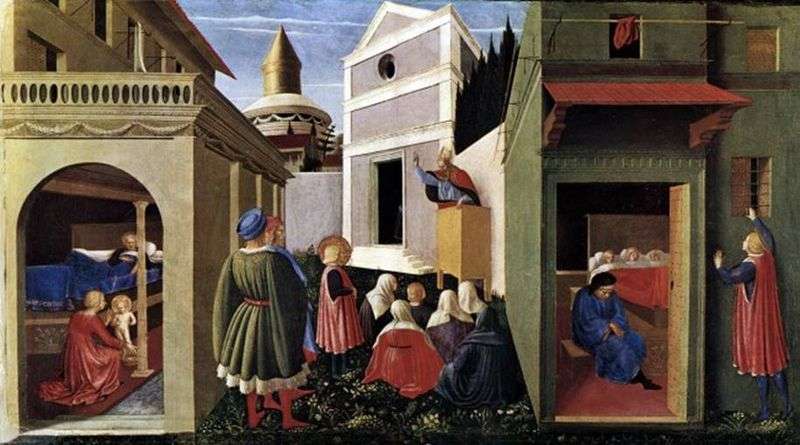 Beato Angelico, whose painting is permeated with a bright, prayerful mood, wrote this altar triptych for the San Niccolo Chapel of the San Domenico Church in Perugia. Two picturesque plaques, which made up the ceiling of the altar, dedicated to the stories from the life of St. Nicholas the Wonder-worker, are kept in the Vatican Pinakothek.

The artist, which was typical for him, even built in a small composition a clear architectural space, dividing the image into three parts. In the first one the Scene of the Birth of the Prelate is presented, in the second – his sermons and in the third – the story of how Nicholas gave a dowry to three poor girls. Beato Angelico is a wonderful storyteller. In the room, at the far wall – the artist, even in a small-sized work, can emphasize the depth of the interior – there is a bed on which the lying-in woman lies. Here, closer to the entrance, the maid washes the newborn.

In the middle part of the composition, young Nicholas, who listens to the church sermon, is depicted. The action takes place on a green flower-strewn lawn, in front of the church, from the pulpit which the priest says. On the left is a scene with the miracle of St. Nicholas: God told him that an impoverished person was going to make his three daughters harlots in order to earn money, and secretly threw a sack of gold on a holy night. Here again is depicted the room of the house, in the open door of which are visible three sleeping on the bed of innocent girls and their dozing, sitting on a chair, unhappy father.

Nicholas, according to legend, is depicted throwing a sack in the window, and the door is open only for the prayers to be visible to the story. The medieval tradition of detailed, colorful painting adjoins Beato Angelico with the transfer of the spatial perspective and the volume figures drawn out by the characters. In addition, much work on wall paintings, the artist moved the majesty of the image into his easel works.