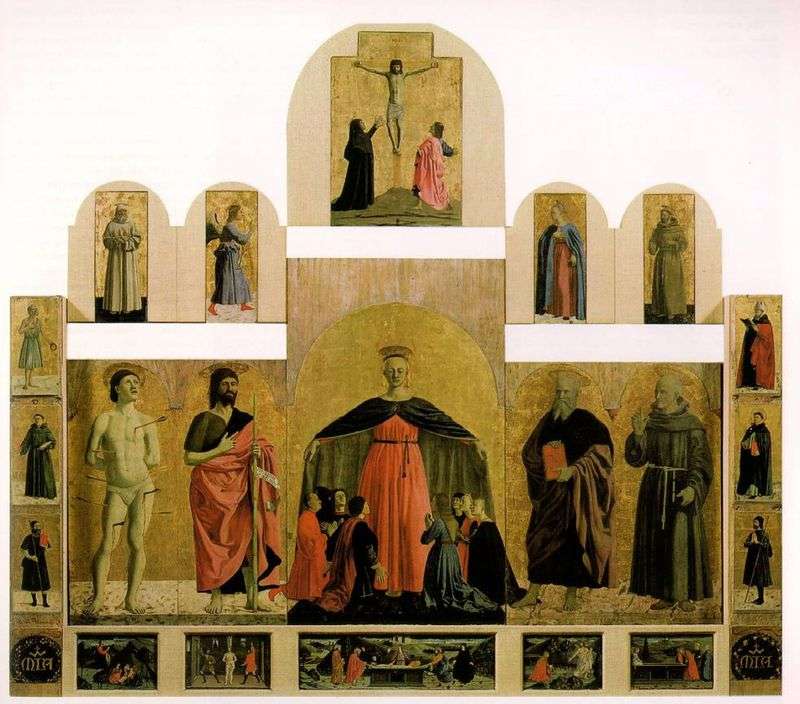 The altar image ordered by Piero della Francesca by the Brotherhood of Charity Borgo Sansepolcro is his first dated work. Now he is in the museum of his master’s hometown. On the central panel of this large, multi-component image, the Madonna of Mercy is depicted, spread out her omophorion, so that all those who seek her protection and help can hide under him. The figures of believers are so small that the viewer should feel as if they are unreasonable and weak children, and the Mother of God is a wise and long-suffering Mother.

The face of one of the figures hides a black hood – a distinctive sign of the members of the Brotherhood. With such hoods, the brothers covered their heads when they participated in funeral processions. Near the man in a black hood, almost behind the Mother of God, someone knelt, in whom, it is believed, Piero della Francesca portrayed himself. Above the central panel is placed the crucifixion scene, and on the side and seven lower panels – the saints. Pierrot received the order for this altar image in 1445, but finished it, apparently, not earlier than 1462, while the artist worked with assistants, and most likely the entire lower row was written by them. Unfortunately, the carved wooden frame of the image, executed, according to the memoirs of contemporaries, with great skill, has not been preserved.