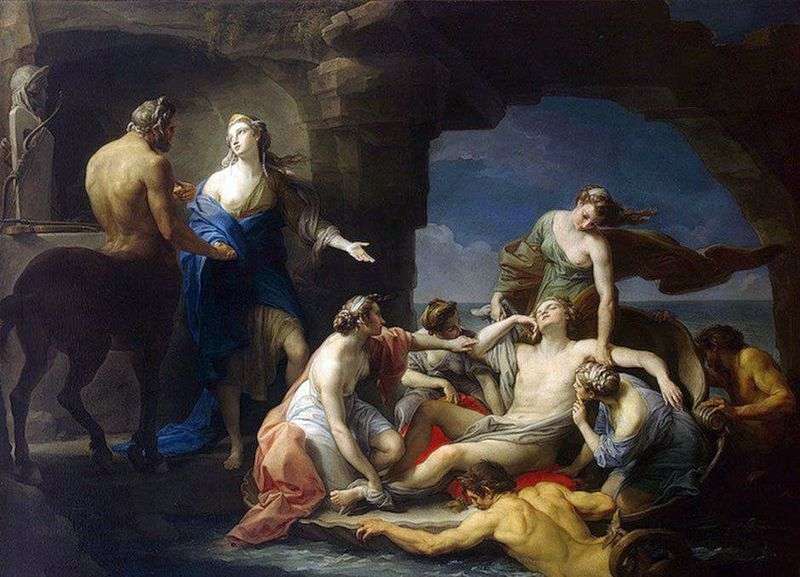 Painting of the Italian painter Pompeo Batoni “Chiron returns Achilles to his mother Thetis.” The size of the picture is 227 x 298 cm, canvas, oil. In the Age of Enlightenment, in the 18th century, the scenes from the exploits of Achilles, the hero of the Trojan War, were popular and widely spread in Europe, but the plot of Pompeo’s painting is extremely rare: except for the Hermitage painting, there is no knowledge of the existence of any such artistic work. The Empress Catherine II, who ordered a painting by Pompeo Batoni, chose this theme herself.

The source was Giovanni Boccaccio’s work Genealogy of the Gods. Mother Achilles, the sea goddess Thetis, gave him up for education to the wise centaur Chiron. Learning that the son must die in the war with the Trojans, she decided to deceive fate. Secretly, the Thetis took Chiron from the sleeping Achilles and transferred her to the island of Skyros to Tsar Lykomed.

At the heart of the strict composition of the artist Batoni two arches: a niche in the cave, known for his learning, the centaur Chiron with the hermus in it and the opening in the rock, beyond which the sea is spread. The servants of Thetis, naiads and nymphs carefully carry the sleeping Achilles to the sink. Next, Thetis says goodbye to Chiron. The ideal proportions of figures of mythological characters resemble ancient statues. Pure, sonorous colors of clothes – blue, red, white, pink – stand out prominently on the calm brownish-gray background of the rock.