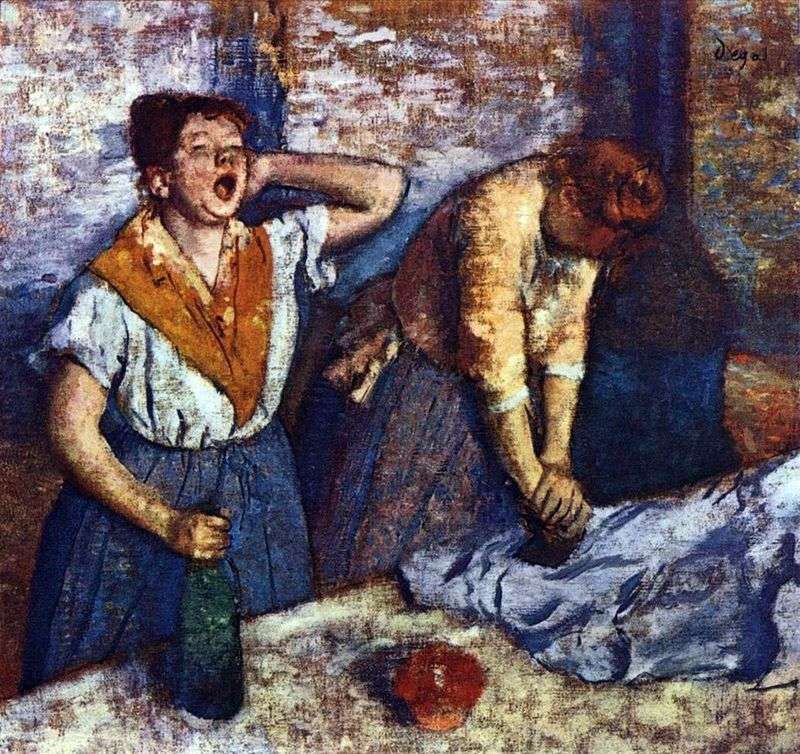 Edgar Degas, like Claude Monet, is considered one of the founders of Impressionism. His life was not easy, but out of all difficult life situations he went out with honor. In his works, Degas could bring the viewer closer to the situation described, that he involuntarily begins to participate in the events and experience them together with the characters of his canvases.

One of these paintings – “The washerwoman is stroked,” or as it is called, “Gladilschitsy.” On it, the artist depicted two women-laundresses, who are in a tiny room. It can be seen that women earn hard living by manual labor – typical hard workers of the early 20th century.

The special roughness of the primer chosen by the canvas artist gives the painting an interesting feature: the oil paint looks like a pastel. The artist almost misses the details, paying more attention to the figures and their outlines.

But the technique and the texture of this picture go to the background in comparison with the characters depicted by the artist. One woman yawns, throws back her head, while it is clear that her back and arms are unbearably painful from constant tension. The other has a form full of despair, and continues his routine work without paying attention to his colleague.

The usual heroes of Edgar Degas’ paintings are the bohemian aristocracy and the creative intelligentsia, but here we see the artist completely from the other side, here he appears before us as a realistic artist and a great humanist, showing us the opposite side of the Parisian brilliant metropolitan life, sometimes hidden from the view of an outside observer luxury and chic restaurants, theaters and palaces.