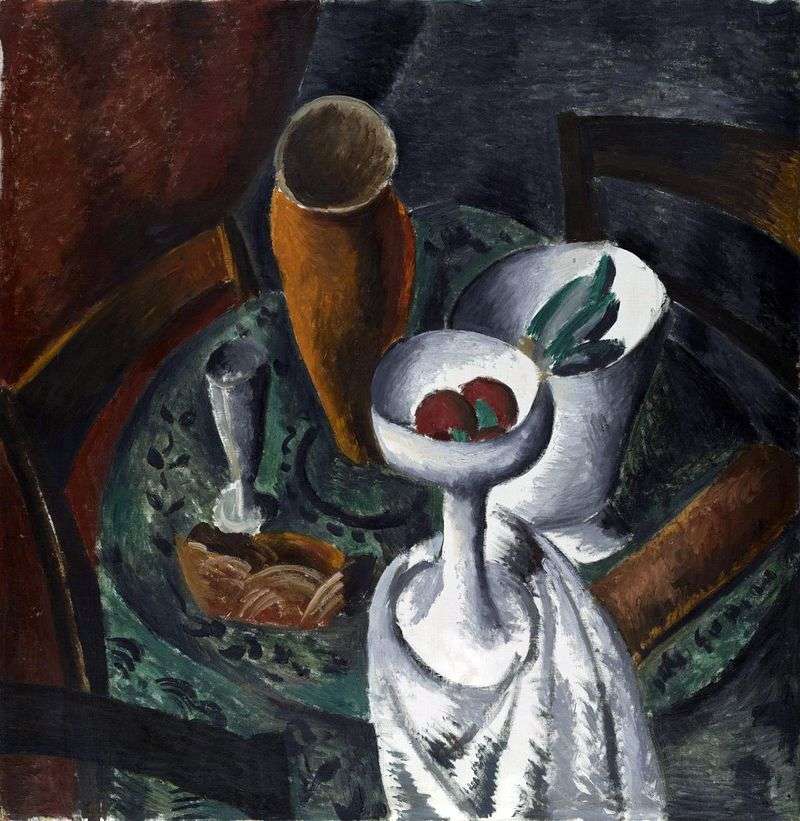 At the beginning of the 20th century Andre Derain was one of the most promising young French painters. Impressive and impulsive, Derain easily succumbed to influences, but thanks to great talent he recycled them in his own way. In 1905-1906 he adjoined the Fauves, and among them was one of the most “savage”.

Derain’s paintings of this period, along with the works of Matisse, are the best of those that created the painting of Fauvism. But already in 1907 the artist, who became acquainted with the Cubist searches of Picasso, begins to work in a manner close to Cubism. Deren did not become a consistent cubist, but he created a peculiar interpretation of this trend.

In the still-life “Table and chairs”, the features of Cubism’s influence are easily discernible. Deren emphasizes the construction of things; wishing to reveal the volume of objects, to enhance the sense of space, depicts the entire still life from above. The composition of the painting is based on a repeating motif of the circle: a round table, on it there are circles of vases and wine glasses visible from above, spherical fruits in a vase. It is interesting to note that Deren does not stand consistently a unified point of view: he does not represent the breadbox on the table, not from above, but from the side.

Here Derain also follows the Cubists who believed that the multiplicity of aspects gives the viewer a more complete picture of the subject. The painting is sustained in a severe brown-gray-green color, also characteristic of the Cubists. Delen’s subtle coloristic talent manifests itself in how the painter diversifies the brown color, linking it with the neighboring tones: the curtain has a reddish hue, the pitcher is yellow, the backs of the chairs are brownish-gray. However, using some methods of cubism, Derain stops halfway.

Deformation of objects does not always lead him to reveal their constructive basis. Derain in his still life seeks more “real” coverage than Picasso, and this brings into the picture a certain stylistic discord. And, finally, Deren can not refuse to admire individual details: he carefully writes out the weaving of a bread basket, passes the pattern on a green tablecloth. Such traits, relevant in the early paintings of Derain, led him subsequently to a cold and false naturalism.

The painting entered the Hermitage in 1948 from the State Museum of New Western Art in Moscow.