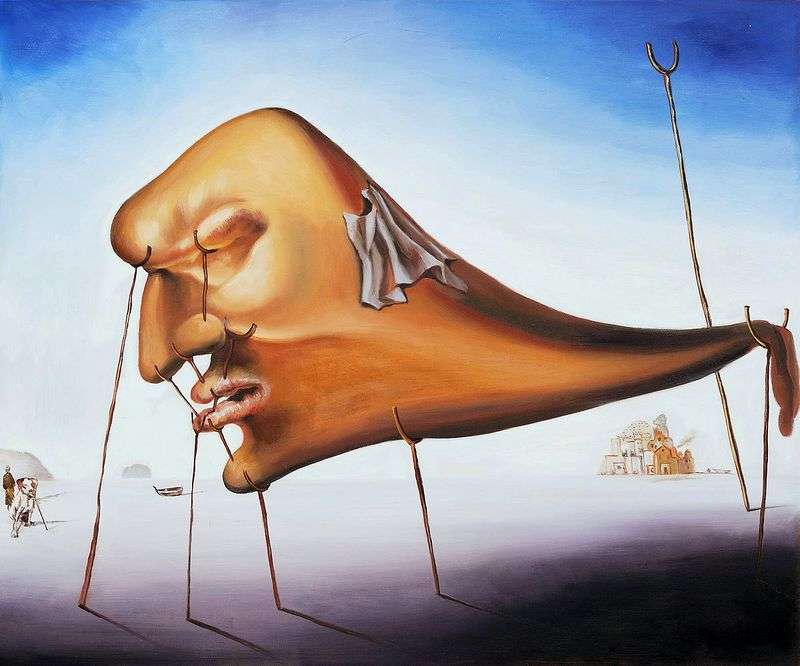 One of the most famous paintings and still causes much controversy, as in 1937, when it was written. This canvas is part of the cycle “Paranoia and War.”

In the center – incredible head size, ugly and unnatural, with a strange bluish tinge of the skin. This head is connected with the neck, which is also different from the usual forms. It is a thin elongated thread, which seems to break off, leaving the body in another world.

Daly himself called this head a puppet monster, he was for the artist a way of heavy sleep, which was ready to literally attack a person. It was only to touch the sheet, noticed the author of the canvas. At the same time, the “monster-dream” is very fragile. He is supported by eleven propensities, and if one of them falls, the whole dream will collapse. In the lower left corner you can see a dog, which also relies on a prop. What is the point? Maybe it’s because the dream is very fragile, and at any time you can lose yourself, and what we see when we fall asleep?

Salvador Dali thought originally, he was called a great mystifier. And also accused that his style is too “poster” and does not fit the definition of surrealism. Images on Dali canvases were often called allegories. If so, perhaps a huge head is our consciousness, our brain, which even in a dream does not float freely over the world. He is attached to the whole earth by some inner fastenings. It can be thoughts, memories, close people and their feelings towards us. Thus, it turns out that even in a dream a person can not be free. He’s always holding something.

The artist painted this painting on Cape Creus, where he was looking for the real basis of dreams. He tried through them to study his paranoid fantasies. “Dream” – is considered the proprietary work of Salvador Dali and one of his most successful paintings.