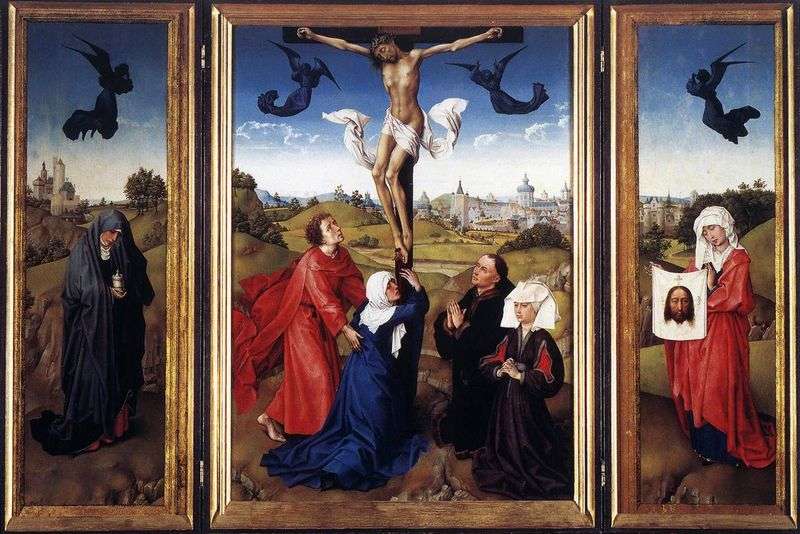 The central panel of this triptych depicts a scene of crucifixion with the Theotokos, the Theologian and philanthropists standing at the foot of the cross. On the side panels the viewer sees Mary Magdalene – she can easily be recognized by the vessel with the world she holds in her hands – and Saint Veronica holding the boards with the Face of Christ imprinted on him. Each scene is surrounded by a curb imitating a gilded picture frame.

Who such were the benefactors, placed by the artist at the foot of the cross, we do not know, but according to their costumes we can determine that the picture should be attributed to the 1440th years. In addition, their fees indicate that they were not rich and did not belong to a higher society.

The triptych in many ways resembles the paintings of Robert Kampen, the teacher Rogier van der Weyden, which gives reason to consider her one of the artist’s early works, although already here the young master writes figures much freer and in much more laid-back poses than his mentor. Moreover, he dares to bold, almost revolutionary innovation: “stretches” the landscape into three panels. Unusually for his time Rogier wrote and the Virgin – traditionally hugging the foot of the cross depicted Mary Magdalene. Numerous copies of the triptych, which reached us, indicate that he made a great impression on the contemporaries of the master.