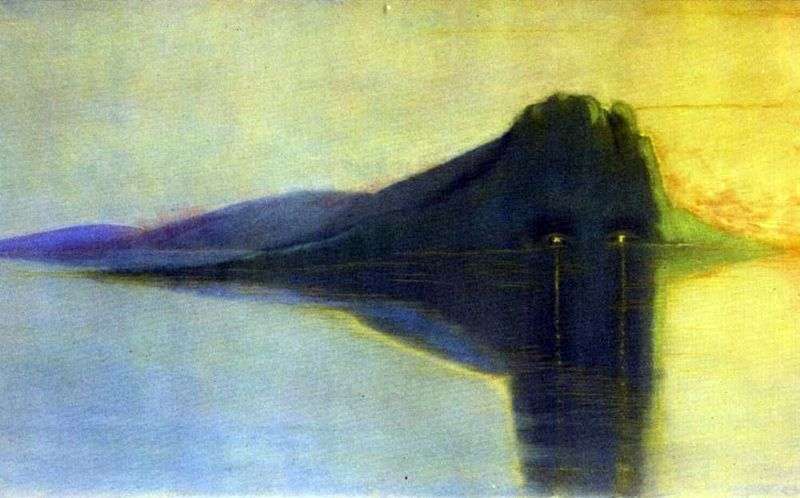 This picture is one of the most popular works of the early Ciurlionis. The picture conveys the calm, immovable grandeur of the island that has spread over the fallen asleep waters, which is so similar to the lurking caudate creature. Two eyes – fishing fires near the water? – look somewhere in space, bewitch, attract the eye… It is a game of nature, familiar to everyone: the outlines of hills, trees, stones so often remind us of living things; it is a simple-minded children’s fairy tale about a dragon, or a sea serpent, or about the “miracle fish of Kit”; and this is simultaneously an amazingly accurate mood of a little mysterious peace that embraces a man by the water, when a daylight shines from the cloudless sky in the summer evening.

Later, in 1904, the artist made a modified repetition of “Rest”. In the Ciurlionis Gallery, the first option is usually hanging in the exposition, and the “younger brother” is stored in the store. It is said that the image put in the basis of the composition was inspired by Ciurlionis with the outlines of an islet that lies next to Druskininkai on the Neman. This islet has a romantic name – “Love Island”. Once one of the friends and closest associates of the famous polar explorer GV Sedov, Pinegin took part in the dramatic campaign “St. Fokie” to the pole.

Describing the wintering in the land of Frans Joseph, Pinegin speaks of the peninsula of Roubini Rock and adds here: “His two-hundred-meter cliffs are inaccessible… In the hazy day, when we saw those capes, they were like the visions of the science fiction artist Ciurlionis. Silent, these capes were called “the mountains of Ciurlionis.” This miraculous monument, placed by Ciurlionis by nature itself and by heroes-travelers, appeared on the polar map only two years after the death of the artist…

In the fifties, Soviet scientists visited near Mount Čiurlionis and published a photo, from which it clearly appears that the Sedovs, looking at the Tihuy Bay, remembered precisely the “Rest” of Ciurlionis. Such was the power of this painting: the artist created a poetic visual image, which continued to live in the minds of travelers who entered into a majestic battle with the polar nature. Is not this the best proof that real art is necessary for people even in the most difficult moments? From the book by F. Rosiner “The Hymn to the Sun”