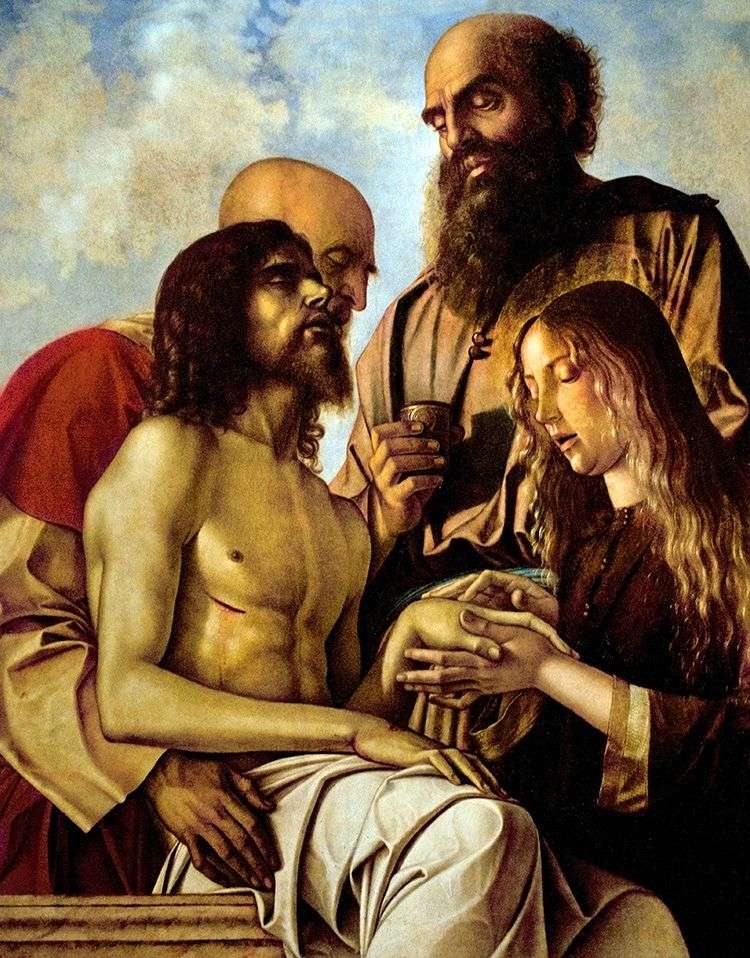 “Lamentation of Christ” was once part of the main altar written by Bellini for the church of San Francesco in Pesaro. In the center of which was the composition “Crowning of the Madonna”, and on the sides – smaller in size scenes. A picturesque board was placed at the top, from here, probably, and the foreshortening shown: the figures are not seen much from below.

In Venetian painting, Bellini completed the Early, while simultaneously opening the High Renaissance. He was already actively using oil paints, and therefore the color of his works is rich, the colors are soft, and

the outlines of the figures are not as stringent as in the paintings of other quattrocento artists.

One of the innovations was that Bellini’s main thing was not the plot, not the picturesque decision, not the desire to describe in detail the visible and invisible worlds, like many of his contemporaries, but the mood. In the presented work the evangelical episode itself allowed to convey the feelings of the characters. On the face of the Savior is the trace of the suffering experienced, the rest of the participants are full of deep sadness, expressed with restraint, because the main thing here is the huge love that fills the whole picture: Christ, who has redeemed the sins of people, and His followers to Him.

St. Joseph of Arimathea carefully maintains the dead body of Jesus, Saint Mary Magdalene, taking with His palpable tenderness His hand, nurturing her with the world from the vessel brought by Saint Nicodemus. The care of Joseph of Arimathea, for which he hides his grief, echoes Nicodemus’s stern and gentle appearance, whose broad shoulders accentuate the fragility of Mary Magdalene. The tears with which the soul of this woman is overflowing involuntarily are compared with the sufferings suffered by Christ, and the scale of His suffering, incomparable with nothing, becomes visible.