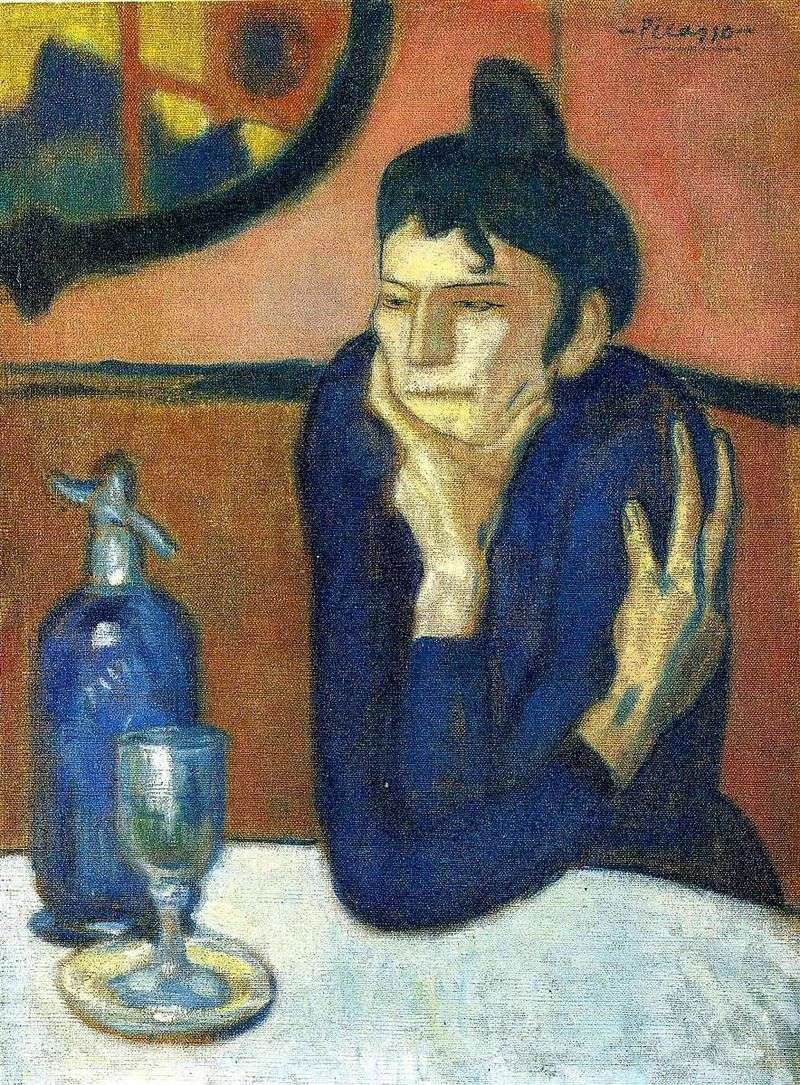 Absinthe, this popular drink, is dedicated to no one picture of the great masters. Suffice it to recall the bright and strong in its effects work Degas “In the cafe”, which is often also called “Absintheater.” Picasso could not ignore this topic by writing an amazing and very recognizable picture in 1901.

During this period, the master became interested in the work of Degas, Gauguin and Toulouse-Lautrec, adopting from them the peculiarities of the composition and the unusual delicate color coloring.

The picture surprisingly accurately conveys the elusive romance of a French cafe of the early 20th century, where regulars in close surroundings spend the evening with a glass of strong, intoxicating drink.

The canvas is devoid of all excess, excess. Picasso first resorted to a generalized interpretation, leaving in the picture only the most important thing – the figure of a woman. She is thoughtful and closed. An extraordinary focus on one’s mind reads in his eyes, a bitter sarcastic smile flashes on his lips. The heroine’s right hand is disproportionately large, and in this, too, one can see the hidden meaning – the woman seems to be blocking herself from the outside world, seeking to protect herself. The face is angular, however, has more vitality than the rest of the figure, as if fashioned from stone and motionlessly frozen. The image is tragic and at the same time extremely tense.

The picture is devoid of complex halftones, intricate techniques – the author is dry and succinct, however, completely reveals the inner world of a woman with a glass of absinthe. Some see it as a deeply unhappy person, immersed in their gloomy thoughts, while others dare to suggest that the representative of artistic bohemia depicted in the picture is because absinthe was so popular in this creative circle.

For the embodiment of the plot the artist chooses contrasting colors – blue, burgundy, white. This unusual color is intended to emphasize abandonment and loneliness of the main character.

Today, this work can be seen in the Hermitage; it makes a tremendous impression on the strength of drama. The image of absinthe lover Picasso has become very popular – a lot of stylized reproductions and souvenirs have been made, there are even T-shirts with the famous angular heroine.

The picture was one of the last “colorful” works of Picasso, very soon the master was plunged into extreme sadness and longing for his “blue” period.