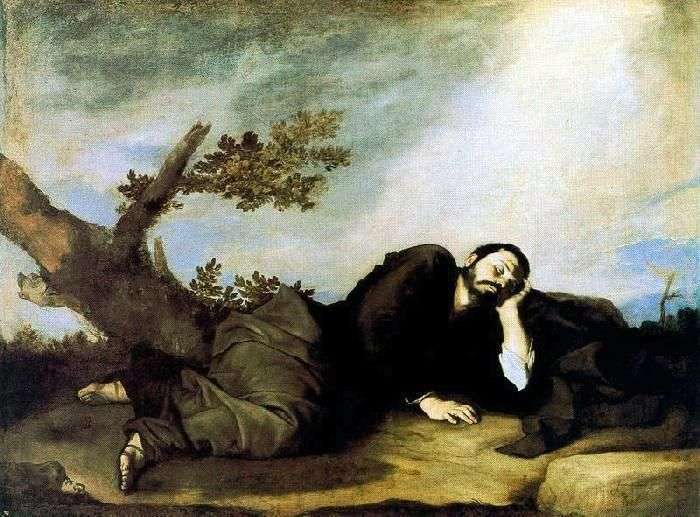 A sample of the powerful tonal painting Ribera. The Bible tells about the Old Testament Patriarch Jacob, who on the way to Mesopotamia fell asleep in the desert and had a prophetic dream. Jacob dreamed of a staircase that touched the earth at one end, while the other departed to the sky, angels ascended and descended on it.

Standing at the top of the ladder, the God of Hosts determined the future fate of Jacob as the ancestor of the “twelve tribes of Israel.” This biblical story attracted the attention of European painters, but its image, even if it was limited to the “ladder of angels”, looked far-fetched and artificial. Ribera decided it in his own way, boldly and simply. The saint, a young, weary traveler of a peasant type, sleeps on stony ground amid a landscape burnt out by the sun.

Instead of the coming night reigns clear scattered light of open space. Almost two-thirds of the composition is occupied by the sky in the movement of clouds, clouds that have run over, breaks in blue. Over the very head of Jacob, a bright, shining band stretches across the sky diagonally, and the figures of angels, barely discernible as clots of the same radiance, melt in it. The traveler didn’t just overcame the hot haze of the day, which was approaching sunset. Jacob’s dream is exalted, full of being spilled around divine peace.