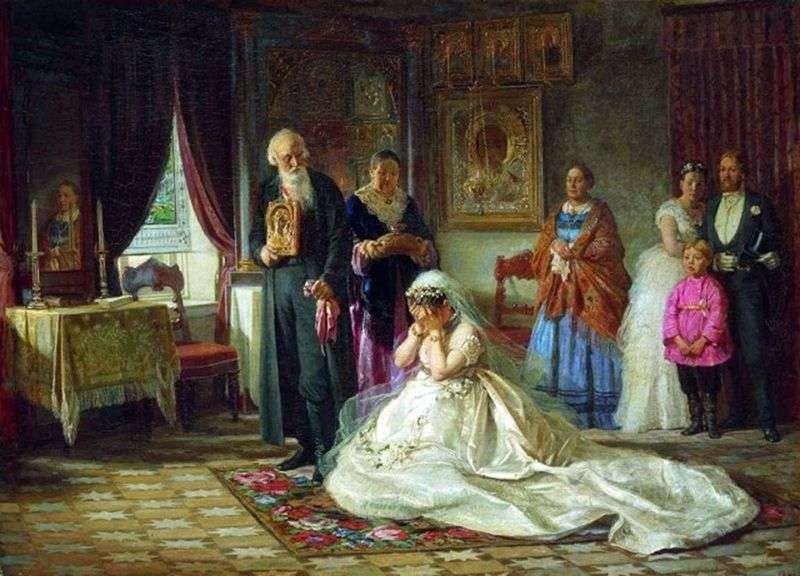 This painting, like many other paintings by Zhuravlev, depicts the dramatic and “backstage” world of the 19th century, reflected in the numerous plays of Ostrovsky. Before the audience, another love drama unfolds – a young bride sobbing in her lap.

Marriage of convenience is not uncommon in those days. So this young lady is destined for the role of the wife of the man she did not love. Most likely, her future husband is rich and very noble, but, alas, old and unpleasant to her. Nevertheless, a profitable marriage is much more convenient for the bride’s parents, who thus decided to significantly improve their already precarious position in society.

The walls of the house are decorated with faces of saints – the bride’s parents are deeply believing people. The bride’s father prepared for the daughter’s blessing for marriage, holds the icon in her hands, but now stands in confusion and watches her, not understanding what actions are required of him.

The mother of the bride is behind her father. In the hands of her dish with freshly baked bread and salt for the newlyweds. The situation put the bride’s parents in an extremely embarrassing situation: their faces are confused and surprised.

In the background, the viewer sees the groom and his relatives. Waited by waiting, they decided to enter at last into the door of the room. Noticeably a whisper between the guests – this event attracted too much negative attention. Visibly, and the state of the groom – he is extremely dissatisfied with what is happening here and is ready just about to break from the spot so as not to observe this shame.

The viewer can assume that the outcome of this event does not bode well for either the bride or her parents. Most likely, this behavior of the bride has angered the groom in earnest. This event could even upset the upcoming wedding, saving the girl from the sad fate of being the wife of the unloved, however, the notoriety would only add to her and her family’s problems.