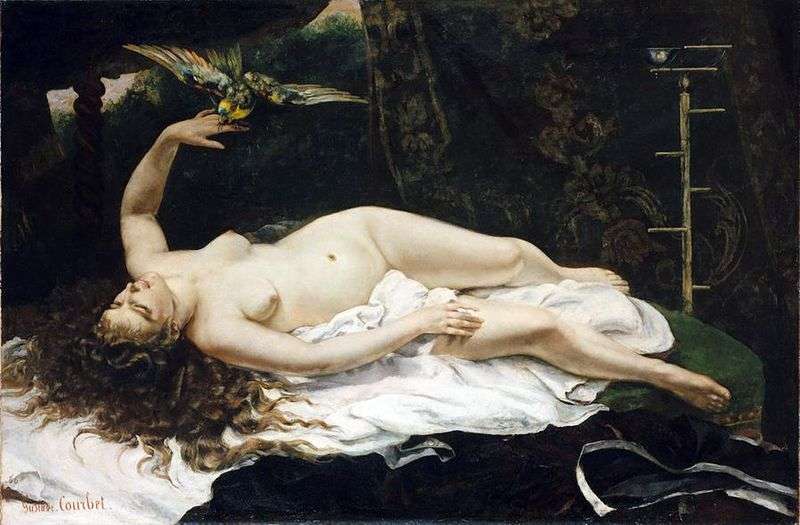 The founder of the French realistic direction Gustave Courbet studied painting in Ornan, then at the Besancon School of Art. In 1839 the artist went to Paris and studied here in the studio of Suis. At that time, he was fascinated by the painting of Velasquez, Ribera, Zurbaran, he wrote with enthusiasm landscapes and self-portraits, which seriously declared himself as an artist in the Paris Salon.

Of great importance for Courbet was a trip to Holland in 1846, when he, delighted with the works of Huls and Rembrandt, finally decided on the choice of the creative path, setting the goal “to capture the morals,

ideas and appearance of my era according to my assessment.” The main theme of the works of Courbet was the life of ordinary people, who, by the dignity with which he represented it, could compare with the images of heroic subjects and great events in the painting of romantics. In the Salon of 1855 his work “Funeral in Ornan”, “Atelier” was not accepted.

In response, Courbet in a separate pavilion with a sign “Realism” arranged a personal exhibition, releasing a catalog outlining the principles of his art. The picture “Woman with a parrot” is not quite typical for the artist’s work, but it perfectly demonstrates the high picturesque skill of Courbet. Other famous works: “Hello, Mr. Courbet!”. 1854. Fabre Museum, Montpellier; “Village ladies.” 1851. Metropolitan Museum of Art, New York.