Home⇒
🎨Van Gogh Vincent ⇒
Weaver with spinning wheel, facing the artist with his left side by Vincent Van Gogh 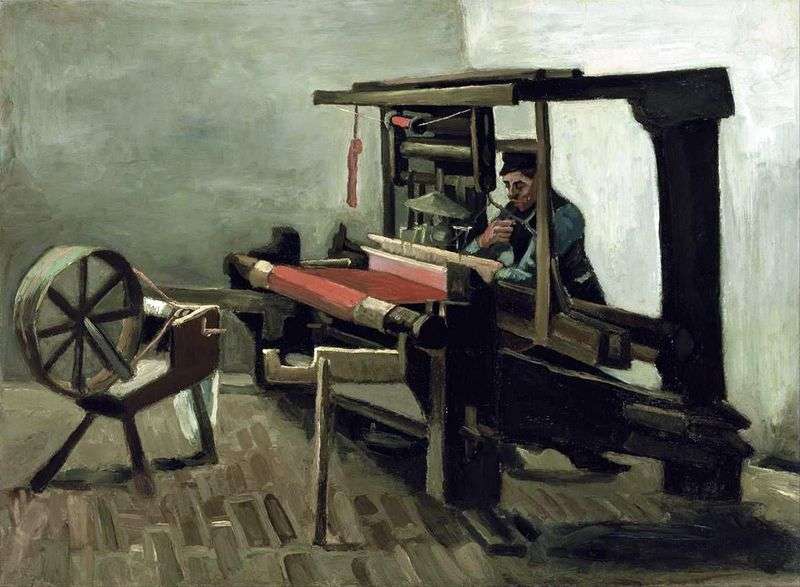 Weavers for a huge loom Van Gogh drew more than once. He was impressed by the impressive size of this mechanism, consisting of heavy wooden beams and sticks. The darkened and soiled machine was a symbol of the heavy human labor that Van Gogh in letters called truly infernal.

On the works of this series, the weaver with the machine is depicted in different angles. In this picture, Van Gogh depicts the scene, being on the left side of the worker, and shifting the center of the composition to the right edge of the canvas. The weaving mechanism is drawn with great precision.

The artist, fascinated by the

complexity of the intricate device, set out to show it in the most authentic way, paying attention to every detail. The person, on the contrary, is depicted rather arbitrarily, his figure came out heavy and awkward, the proportions were severely violated. Apparently, there was an inability, which at the beginning of the creative path was for the artist a pretty strong obstacle.

One of the goals that Van Gogh set for himself was to expressively write a wooden machine against the gray wall. Due to deepened shadows and artfully selected lighting, he managed to depict the machine as voluminous, expressive and almost monumental.

Monochrome color scheme consists of shades of gray and brown colors. But a few bright spots, especially a canvas of thick red color, deprive the color of monotony, creating an expressive accent.