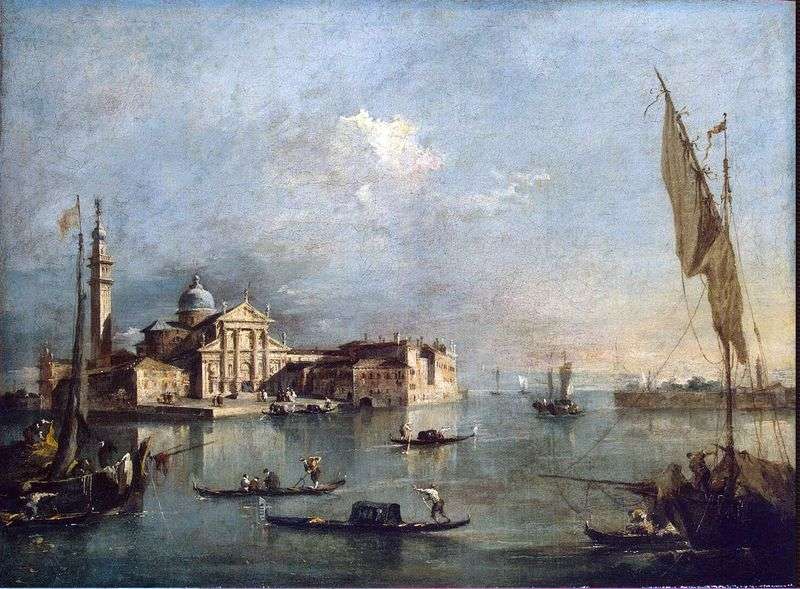 Francesco Guardi headed the family art workshop after the death of his brother. He began his career with portraits, wrote religious compositions and sketches in interiors, but all his life he remained a singer of his native city. It is true that it was the work of Guardi, which is the top of the European genre, that marked its completion.

The painter departs from a clear, structurally marked objectivistic vision. Venice on its canvases is a fantastic fantasy, enveloped in a poetic haze of vibrant transparent light. This landscape has another name – “Baccino San Marco with a view of the church of San Giorgio Maggiore and the Canal Giudecca.”

Next to the majestic temple of San Giorgio Maggiore, the creation of Palladio, on the left flank of the canopy there is a bell-tower that fluttered upwards, which fell in 1774.

One can thank the artist for the accuracy that preserved the “historical details”, but the impression of romantic excitement, sadness and even anxiety, which is transmitted in his later works by the shaky trembling of the smear, rich but still slightly extinguished with a color gamut with fluorescent flashes of light, blurred outlines of shapes.