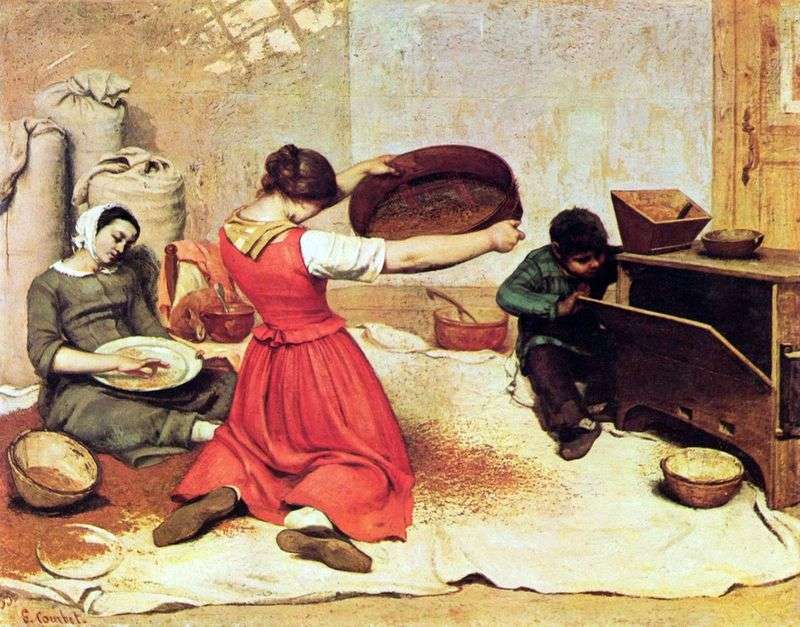 Cezanne, a great admirer of Courbet, was delighted with this painting and in one of the letters noted: “The yellow light flooding all around, a large reddish veil spread out on the floor, clouds of dust rising over the grain, a curl falling on the neck of

one of the women, as on the most sensual canvases of Veronese, and hands – these hands are the color of melted milk, the peasant’s outstretched hands are as smooth as coastal stones… But this was posed by his sister… It can be placed on one of the paintings of Velazquez: it will miraculously fit there, I swear! .. What all is full here Goes and grainy! How all this life! It’s really impressive! “. Further, speaking of the same picture, Cezanne emphasizes that the palette of Courbet “smells of grain.” This, without a doubt, is the highest praise from the artist, who believed that,

The picture “Veyalschitsy” occupies an exceptional place in the work of Courbet, however, as in the history of painting of the XIX century in general. The artist refuses to use the perspective, so the scene is deprived of depth. All the figures seem flat and are depicted on one plane. Here you can trace the influence of the art of the East, and in particular Japanese engravings. In this sense, the film “Veyalschitsy” becomes a peculiar stylistic predecessor of the works of Eduard Manet or Paul Gauguin.