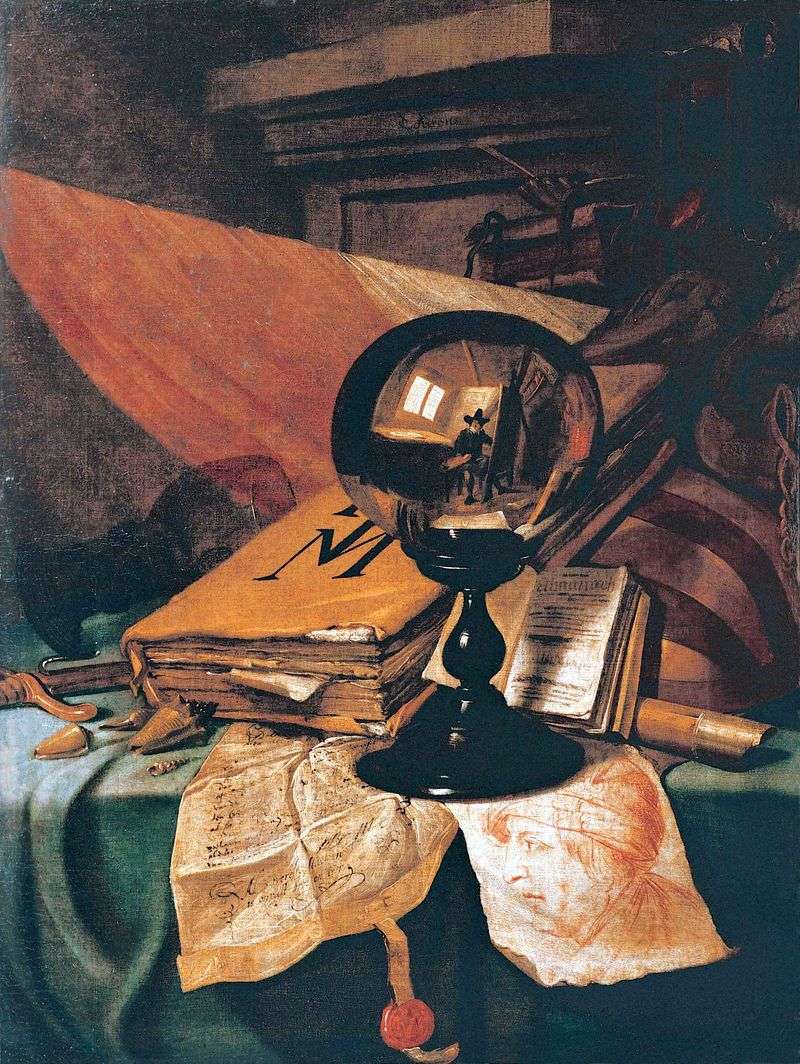 It was considered the work of an unknown Dutch master of the XVII century. This attribution was first proposed in 1962. The painting is somewhat similar in color and composition to the still-life of Vincent Laurence van der Winne, kept in the Museum of Frans Hals, Harlem. The signatures in both paintings are somewhat similar; The remaining letters on the picture are read as letters of the name “laurensz”, which the artist always signed. Similar motifs of the picture van der Winne are kept in the Louvre.

The picture shows a portrait drawing; apparently, this is a self-portrait of the author or his portrait of the work of another master. The facial features depicted are similar to the portraits of van der Winne’s work of Lendert van der Cohen and Judith Leicester.

Objects are attributes of an allegorical composition, where books symbolize knowledge and wisdom, and the popular motif of the immortality of art is read in a musical instrument and sketches. The symbol of earthly greatness and glory is the banner. Quickness and impermanence show an hourglass. The fragile vessel on its side is empty like a man. The central transparent sphere, apparently, serves not only as an attribute of the world at work, but also refers to the lines depicted on the sheet, which contain words about the emptiness and falsity of earthly glory. The artist’s double self-portrait deepens the symbolism of the work.

The motif of the self-portrait of the artist, reflected in the glass sphere, is connected with the ideas of fragility, the destruction of the world within which the master lives, art is created; the glass sphere in the emblem of the XVII-XVIII centuries had precisely this significance of the fragility of earthly affairs.

Another detail of the still life can be deciphered as a motif “Vanitas” – the image of the book of accounts, in which the results are summed up for the day, the account of the decreasing days is kept; in the picture we see just such a book of oblong form, marked by a typical trademark of the trading company, in which the letter “M” was to be included.