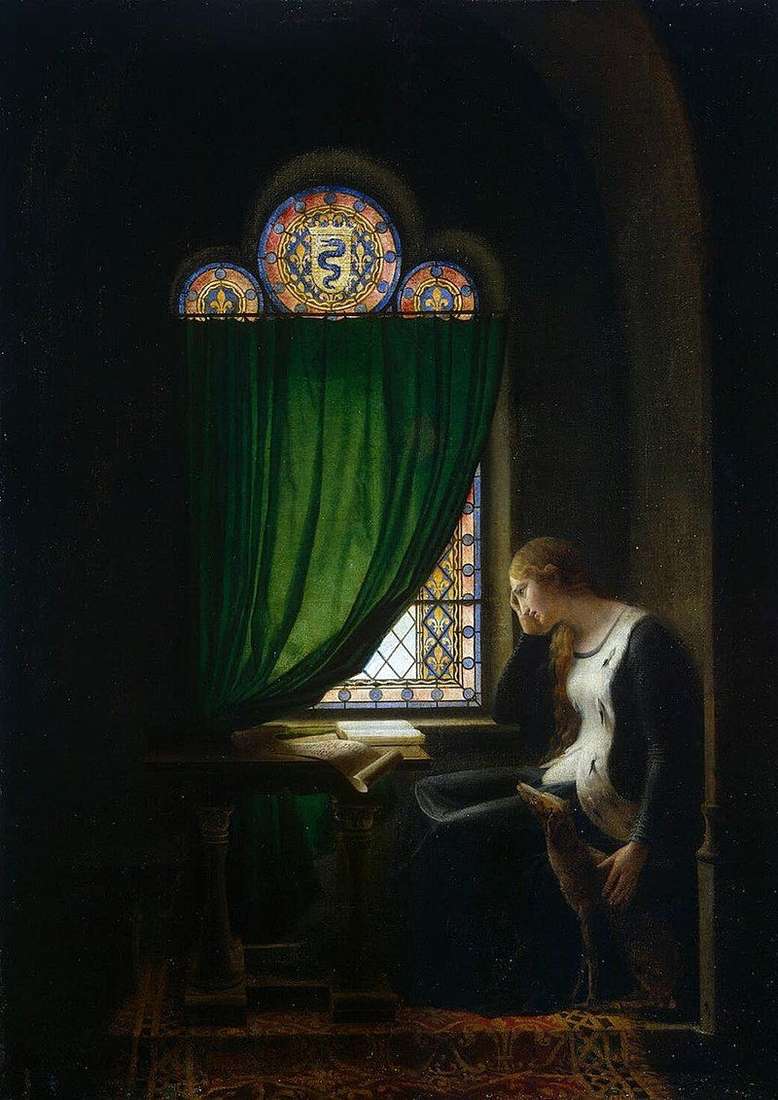 The picture of Fleury Richard “Valentina Milanskaya” is written on a historical plot and represents Valentina of Milan, mourning the death of her husband, the Duke of Orleans, killed by the Duke of Burgundy in 1407. The work was created by the representative of the Lyon school Fleury Richard, a student of Louis David.

The work was exhibited at the Salon of 1802 and was a great success. Among his contemporaries, who highly appreciated the painting, first of all, David should be mentioned, who noted the artist’s mastery in the transmission of light. “Valentina Milanskaya” was perceived

by critics as a manifesto of the new movement, later called “troubadour” painting.

The term, borrowed from medieval poetry, outlined the main theme of the masters of this trend. They seemed to translate into the language of painting poems about the “beautiful lady”, depicting also French knights and troubadour poets. Along with Fleury Richard, Pierre Reval, Jean-Antoine Laurent, Francois Marius Granet and many others belonged to this trend. Their painting is considered in literature as a genre of “historical joke” and at the same time as a forerunner of romanticism. Fleury Richard was greatly impressed by the tombstone of Valentina Milanskaya, which he saw in the Paris Museum “French Monuments”, and was struck by Valentina Milanskaya’s motto on the tomb: “Nothing exists for me anymore, / I myself am nobody.” In his work, Richard reproduced this motto on a scroll, lying on the table and the corresponding sad state of the heroine. She mourned the death of her husband for a year and then, in 1408, died. Next to the widow is a dog, also experiencing the loss of its owner.

In the upper part of the window two lilies are visible on the sides – and the blue snake, from which Valentina Milanskaya came). The first owner of the picture, Morin, ordered Fleury Richard to create a steamy composition for her – “Charles VII writes farewell poems to Agnèès Sorel.” In 1805, Empress Josephine acquired Valentina of Milan. In 1814, the canvas was inherited by Eugene Beauharnais, Duke of Leuchtenberg, Prince Eikhstatt; then – his son Maximilian, who in 1839 married the daughter of Nicholas I. In 1839 or 1853, the “Valentine of Milan”, together with the collection of the Dukes of Leuchtenberg, ended up in Russia. The last mention of her stay in Russia is contained in the “Retrospective Exhibition of Lyonian Artists” catalog in 1904.

The most detailed information about the work is given in the book “The Style of the Troubadour in Painting” by M.-K. Chadonre, who considered Richard’s painting to have disappeared, referring to the opinion of VN Berezina, the former curator of the French painting of the Hermitage, who believed that many items from the Leichtenberg collection had been sold to foreign collections before the 1917 revolution. As it turns out now, not all the paintings of Leuchtenberg, who are missing, have gone abroad. In particular, two works by Fleury Richard – “Valentina of Milan” and “Charles VII writes poems to Agnes Sorel” – are still in Russia. In 1998, “Valentina Milanskaya” was temporarily located in the State Museum of Fine Arts. A. Pushkin, and in 1999 was offered to the Hermitage for purchase.

The work has inscriptions and stickers on its back, certifying its origin from the collection of the Dukes of Leuchtenberg. The attribution belongs to A. A. Babin, a candidate of art history, a leading researcher of the State Hermitage Museum. For the State Hermitage, the “Valentina Milanskaya” is of particular interest, since Fleury Richard was not previously represented in the Hermitage collection, and the picture itself is associated with the history of the museum and the collection of Eugene Beauharnais, from which many exhibits of the museum come. As part of the famous Malmezonskiy service, now stored in the Hermitage, there is a plate depicting this picture.