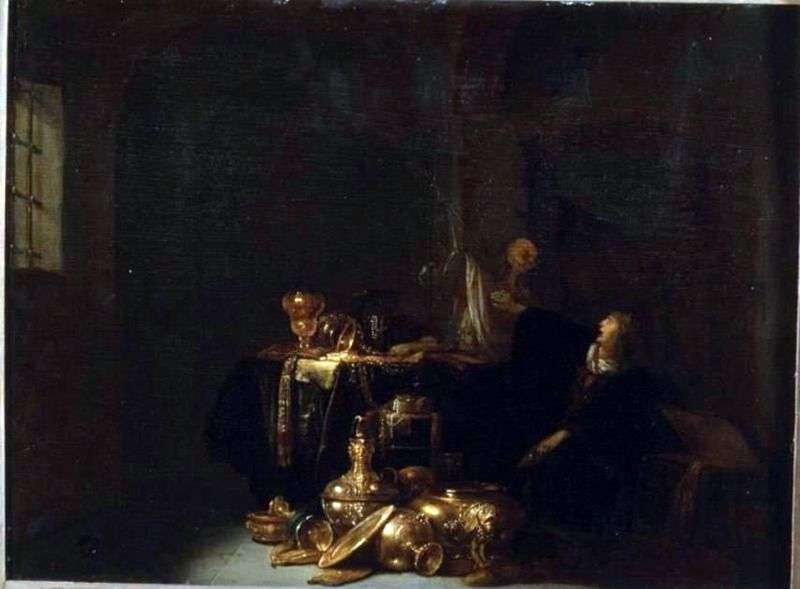 For a long time it was believed that the picture came out from the pen of Van den Eckhout. Soon, the authorship of Willem de Porter was determined, which was confirmed by a number of analogies. A good example is the picture “Vanity of vanities”, where death in the form of a skeleton is to a woman, showing her a mirror. As well as “Vanitas”, previously located in London, which depicts a mirror and a skull, which shows the woman an old man.

The allegorical content of the picture does not give in to the otherness of interpretation. All the typical attributes of this baroque subgenre are present: the collected jewels, carelessly piled in a pile, expensive utensils – characterize the theme of human striving for the accumulation of earthly riches; the figure of the usurer personifies the sin of stinginess, greed; the appearance of Death itself makes one recall the vanity of all efforts to acquire wealth on earth, subordinates the whole image to the “vanity” motive and should turn the viewer to thinking about the true values of spiritual life. Unlike the Still Life with a Skull, an unknown painter, this picture is not a revelation, all the elements depicted are very typical of style.

The artist has repeatedly turned to this kind of allegorical themes: in addition to the compositions mentioned above, such are the Old Woman weighing gold, Allegory in the National Gallery, Still Life in the Museum of the Duke Anton Ulrich, Contempt for wealth in the Museum of Fine Arts, paintings in the Art Museum and others.

“Usurer and death” refers to the late period of the artist, as well as most of the above works. The share painted in the XIX century, the picture had a difficult fate. To be in the State Museum of Fine Arts in 1927, the picture was bought up in Ostafyevo, The Hague, and various cathedrals, which is quite ironic for a painting in the Vanitas genre.