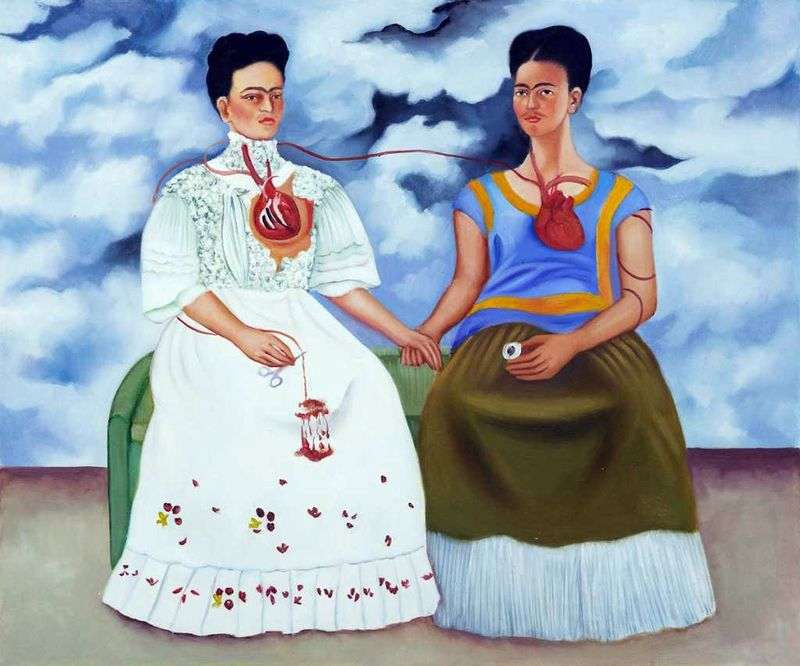 The painting “Two Frida” was written in 1939. The artist wrote herself. Materials for writing the work were canvas and oil, the canvas dimensions are 173 by 173 centimeters. Currently, the picture is stored in Mexico City, in the Museum of Modern Art.

The difficult fate of Frida Kahlo, the author of the picture, left an imprint on her art. Reality appears to us on her canvases painful, refracted, surreal. Frida creates her own reality, fleeing into her from real life and experiences, hiding from adversity and numerous diseases. Perhaps, to some extent, the painting was for Frida Kahlo a healing tool, helping to splash out what was accumulating in her soul. To some extent, Frida from her own paintings was herself an imaginary friend.

Let’s look at the picture “Two Frida”. On it, two women in festive attires are sitting, holding hands. Both women have the same face. Their chest cells shine through, revealing bright red hearts with cut arteries to the viewer. In the hands of one of the women are scissors, and her snow-white dress is sprinkled with blood. Dense clouds turn black in the background.

Gloomy picture, but the reason for writing it was not the most pleasant: Frida wrote her under the impression of a break with her husband. Diego River was also a Mexican artist, and their relationship was turbulent and vivid, and it was very difficult for a woman to survive the separation. Kahlo said that Diego was in love with one Frida, and she became different, and portrays both Fried in this picture. One of them is Mexican, another European, which can be judged by their dresses.

The painting “Two Frida” is filled with pain, but, at the same time, it has great artistic value. Memorable images, force of influence, symbolism – all this makes it a real work of art.